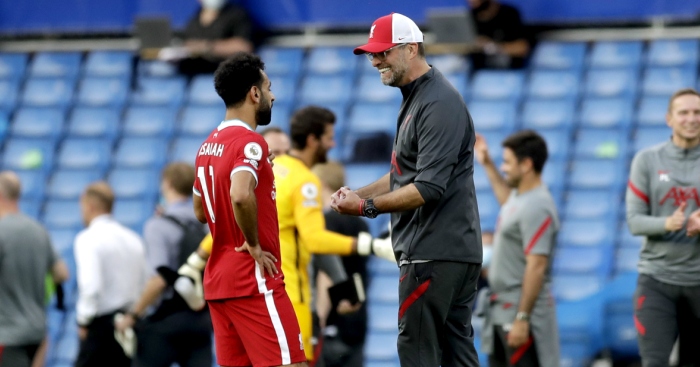 Jurgen Klopp has avoided ruling out Mohamed Salah from Liverpool’s Premier League clash against Leicester City on Sunday, despite the forward returning positive coronavirus tests during the international break.

As reported in Metro, the Liverpool forward returned to Egypt on international duty, during which time he was filmed attending his brother’s wedding in Cairo, neither wearing a mask nor social distancing.

Since then, the 28-year-old has tested positive twice for coronavirus, forcing him to miss both of Egypt’s Africa Cup of Nations qualifiers against Togo. Salah is returning to Merseyside today, after securing a private flight with fellow compatriot and Arsenal star Mohamed Elneny, who also tested positive for coronavirus when on international duty.

While the Arsenal midfielder has been ruled out by his club for Sunday’s game against Leeds, Liverpool and Klopp seem reluctant to provide such clarity.

Speaking today, Klopp said: “He is flying back today. I’ve been in close contact with him. When you have a negative test, the process starts. He has had no symptoms. Nothing to say in public about the situation.

“A brother’s wedding is a very special moment. What I can say about my players: they are incredibly disciplined, all. But sometimes it doesn’t work out like this and something happens. All the rest is between Mo and me. We are fine.”

Meanwhile, Klopp was eager to heap praise on the Foxes, who top the table and have been growing in strength under former Liverpool manager Brendan Rogers.

“They showed it last year how good they can be. Changed styles slightly. Dealt really well with injuries. Good example of how to deal with injury crisis. A clear way of how they want to play.They are contenders for everything.”