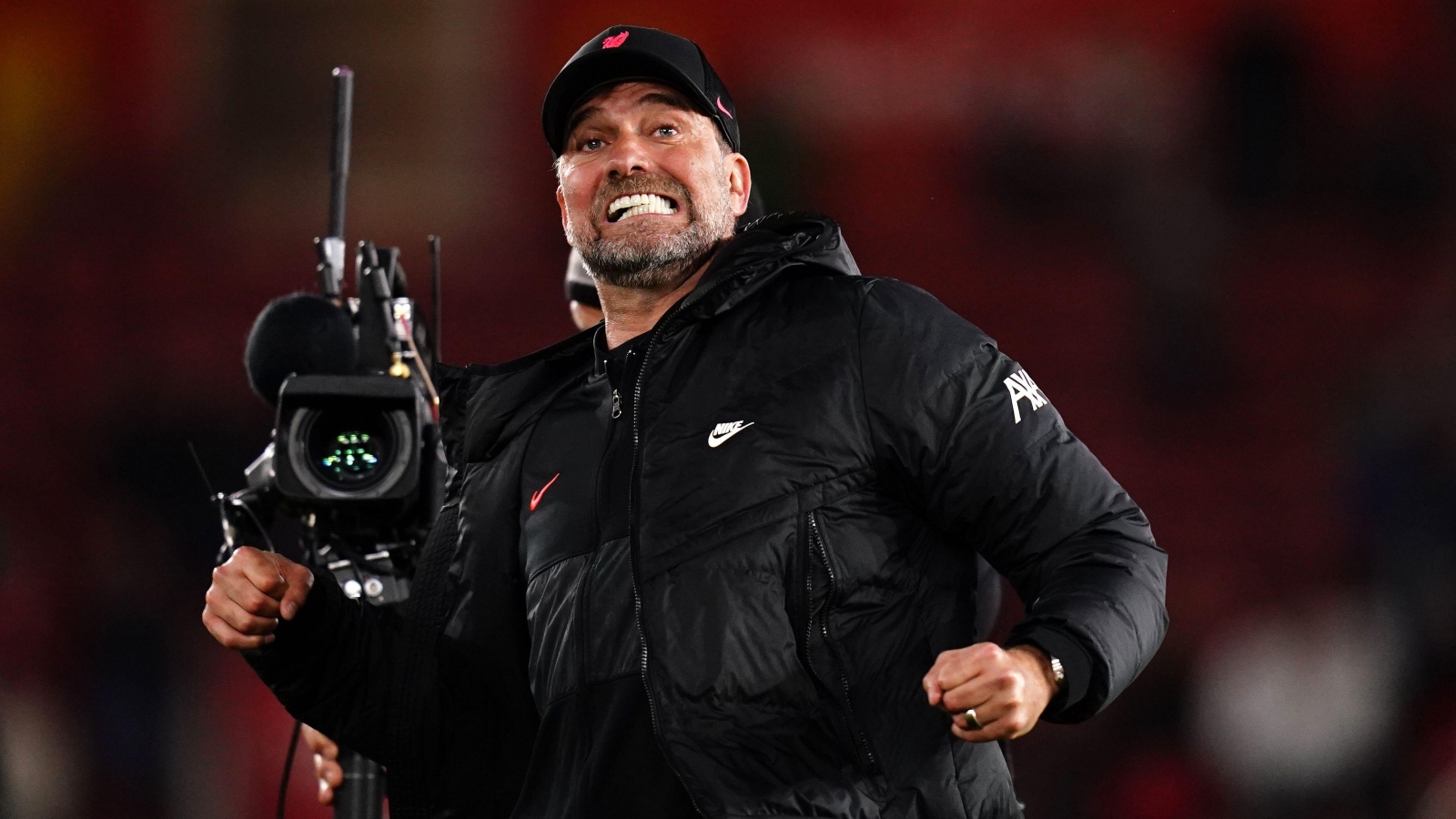 Liverpool manager Jurgen Klopp has said it is “unlikely” that his side will beat Manchester City to the Premier League title.

The Reds picked up a crucial win at Southampton on Tuesday night to go into the last day of the season one point behind Pep Guardiola’s side.

With City leading by a point, a win against Villa will secure them their second league title in a row. Liverpool will be hoping for their rivals to slip up; however, Klopp believes that is an “unlikely” scenario.

Following their win at St Mary’s, the Reds boss told BBC Sport: “The way we played with nine changes is outstanding.

“I saw a sensational performance without rhythm. The mentality after being 1-0 down in a situation I think we agree could have been a free-kick. We were all a bit outraged but the boys calmed down.

“We scored a wonderful goal, we were never out of the game but it was open again. Second half we kept going, had spells where we didn’t control the ball well enough then scored to make it 2-1 and then it was normal.

“Top game, unbelievable performance, nine changes. It worked out because of the players. If it hadn’t worked out it 1000% would have been my responsibility.”

On if winning the title is unlikely, Klopp said: “Of course it is unlikely because City play at home against Aston Villa, who play only on Thursday. It will be tough against Burnley, they fight for survival.

“But it is football. I think the time when City became champion [in 2019] it was because of 11 millimetres. If someone wants us to be champion then we have to win first and Aston Villa need to get a point at City.

“It is possible, not likely but possible. That is enough.”

Speaking to Sky Sports, Klopp added: “It’s unbelievable, what they’ve done makes it even more special. Outstanding. What can I say about this group?

“We would have had much more problems today if we’d played the guys who played 120 minutes on Saturday.

“So many good things.

“I ask for a lot. I saw them enjoying the game and playing football. We conceded a goal out of nothing, It looked like a foul. I’m really proud of the boys. Since January we only drew three times. We had corona outbreaks.

“I never had a group like this. They push each other constantly. Tonight is really special. It worked out because of the boys.”

The Premier League title will be decided on the final matchday.

Liverpool will hope for help from old friends at Aston Villa who play City 🤞 pic.twitter.com/DHmd5r7fgz

On the final day of the season, he continued: “We all know. We never gave up. We’ll give it a try, It’s our home game, last home game of season. The atmosphere will be outstanding. We’ll try to use it. We have to do our job. Football is a tricky game sometimes. Aston Villa play on Thursday and then Sunday. We’ll see but you have to focus on yourselves.”

Klopp added: “We conceded a goal out of nothing, I did not see it back but for me it was definitely like a foul.

“We already had the same situation for us a while ago against Manchester United when (Marcus) Rashford scored a goal.

“(It was) exactly the same and afterwards: ‘oh yes, we could have given that (as a foul)’. But who cares?

“It made it (the win) only more special and I am really proud of the boys.”

Klopp is hopeful an injury to Joe Gomez, who was forced off with what appeared a knee problem, will not be too serious.

“I hope we are lucky. Joe himself has pain but not too much,” Klopp said.

“He got a real shock to the system. He was sitting in the dressing room when I spoke to him and was in a good mood.”