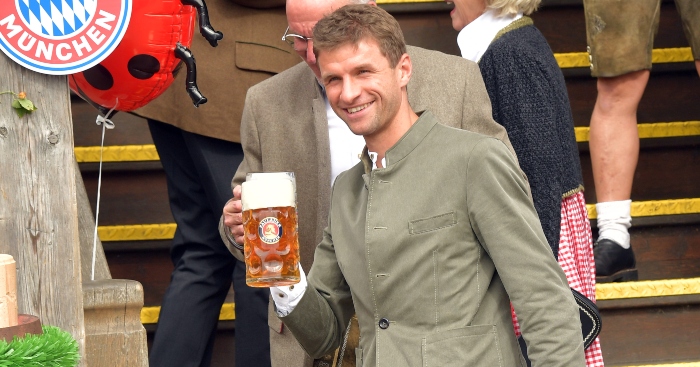 Get Marcos in midfield
Considering the shortage of spunky midfielders (yes you, Ander) could Marcos Rojo become a midfield player for United?
He’s got the same nasty streak, he loves getting forward, and he’s good at fouling.
When the full backs roam forward, he could also drop in to defence to cover. He admittedly wouldn’t be ideal, but I feel like he could do a job there for the team.
Ryan B

I remember first time watching him when he was playing for Juventus. What a strange striker. As you described well in the article, he somehow arrived at the correct place in the most crucial time. The things that I like the most from are his celebration (God, he always shouts and so passionate after bundling the ball over the line) and his presence in the penalty box. For some reason he has this aura where his teammates can think “f*** it, I will cross/pump the ball to the penalty box and maybe Pippo will somehow slot this one in out of nowhere.” What an interesting player. Still can’t believe Juventus offloaded him to AC Milan (well, after Pippo Juve has so many great strikers. But still…)

Fast forward, this type of Pippo-player is perfected by Thomas Muller. I mean Muller somehow perfects the art of getting into the right space and flunks the ball over the line at most crucial time. I love Muller on his versatility and just being good goal scorer (not prolific per se). Muller has definitely more complete skill set than Pippo (not to mention the trophy haul)… So, now that Muller is being under-utilised in Bayern, Mr Klopp can you somehow convince Muller to come to Liverpool? Man, that will be some fun to see Liverpool’s front three supplemented by the Pippo-ability and unpredictability of Thomas Muller. Make it happen!
Vincentius (Well, ManUtd will somehow win won’t they?), Cambridge

Doing Foden a favour
The fairly pedestrian nature of England’s midfield in the last few games, Ross Berkley’s efforts against Bulgaria aside, has provoked yet more discussion on the development of Phil Foden and his playing time (or lack thereof) at Manchester City.

The thought has occurred to me though, is playing lots of top level football in your teens actually a bad thing? Take Dele Alli for instance. He was an incredibly exciting teenage prospect, wowing at MK Dons before deservedly breaking into the Spurs first team and impressing for a good year to 18 months through his teens. Then at some, hard-to-define point, things seemed to get a lot harder for him, his confidence dropped through the floor and for the moment he’s a shadow of the exciting young buck we saw around 2017. Obviously there’s still loads of time for him to turn things around and show that wonderful talent again (I once drunkenly asserted that he has the skillset and physicallity to one day become England’s Zidane, which might be pushing it a bit, but there’s definitely a player in there somewhere).

Other high-profile examples you could point to are Michael Owen and Robbie Fowler, two explosive teenage strikers who just didn’t seem to kick on properly into their mid 20s and kind of faded away as a result. Players who had to grind their way through a few dark times and loan spells into their early twenties though now seem to be hitting higher highs and sustaining them (Harry Kane instantly springs to mind).

The obvious counter-examples you could point to are the likes of Ronaldo and Messi, but they’re basically an exception to every rule you could write on player performance. A different example I came across in the Guardian’s recent revisit to their survey of top youth players in someone like Youri Tielemens, who had clocked up 200-odd games for Anderlecht by the time he was 20. However, does it count if they’re in the Belgian league? Maybe, maybe not.

So my point is, maybe it’s much better for Foden, Man City and England if he spends his teens playing the odd League Cup game, Champion’s League dead rubber or 7 minutes at the end of the odd premier league match, being taught by one of the world’s best coaches and learning from the likes of David Silva and Kevin de Bruyne? Do you have to be playing lots of top level football in order to develop in that way? Perhaps we’ll see a much better player emerge at 21 than what we’d be seeing if he was already a first team regular.

Luis Suarez wants a word
Random question for Liverpool fans – within the premier league era, would you replace any of your current starting XI?

Allison? No
Roberston? No
Van Dijk? No
Matip? with Carragher/ Hyppia? Probably no
TAA? No
Henderson? Only yes I can think of with Gerrard
Fabinho? with Mascherano? No
Wijnaldum? with Mcmanaman? Probably no
Salah? No
Firmino? With Fowler/ Suarez/ Owen? Probably no
Mane? No

Klopp’s character
Just a quick point on Matt Stead’s otherwise interesting piece. The assertion that Jurgen Klopp’s focus on outside influences was “atypical” is quite laughable.

Great manager, but throughout his career he’s consistently blamed a multitude of outside influences for poor performances. This includes — the wind (on more than a few occasions), the snow, the ‘dry’ Anfield pitch, the ‘dry’ Hawthorns pitch, the ‘dry’ Bury pitch, Manchester United’s injuries, BT Sport and of couse, referees.
Tom

Not giving up on Frank
Just looked at the f365 article on Euro 2020 qualification. That mascot Skillzy has proper freaked me out. That head is unreal in a creepy way. The words of Captain James T. Kirk come to mind when he once explained Spock’s peculiar behaviour to Earthlings; “Too much LDS in the 60s”.

I know UEFA are trying to broaden their footballing church. Why not start with the perfect mascot and then organise everything from there?

Why not start at the birth place of the best possible mascot? It’s Timperley! In the North of England. The home of the iconic and sadly missed Frank Sidebottom (Chris Sievey) and now where his statue resides. What’s not to like about Frank’s big pathos filled head? A lost hero to the modern age. A genuinely moving backstory and rousing football anthems to boot (3 shirts on the line).

Timperley nestles on the edge of Mancunia and natives will be better able than me to explain the transport links and stadia facilities. I’m looking at you Altringham fans! So why not cheer up a footballing nexus?

If not Frank and Timperley, where else has the jump on mascots or reasons to hold the next Euros or Worldies?
David lfc

Accepting the inevitable
I can appreciate that Liverpool have bottled it over the years; my own club Arsenal did, as did that lot from that rainy part of the Country ( cue Travis… especially now ! 😄). However, I can actually see things working out for Liverpool this season. The luck (which you make yourself) is going their way and Man City seem a little below par…yep they’re hunky dory 90 % of the time but not for the other 10 % !

It’s like me at work: I will be superb with about 9/10 of my appointments but the Gestapo will pick up that one I was below par with and I will be QA’d on that ! I digress, the point I’m making is that Man City seem to be struggling to pass on a number of fields whereas Liverpool are scraping home by picking up points elsewhere when their performances aren’t great overall!

I hope anybody who works for a corporation etc can understand what the hell I’m going on about but at the end of the day it’s confidence and it will be all about if/when Liverpool have a Norwich ( oh dear..sounds pornographic ! 😜 That’s another topic !!!). Will they cope? If so, good for them !

However, I won’t be happy because we’ll never hear the end ! I have one particular colleague who can’t resist trolling me about Liverpool compared to Arsenal ! Bloody hell, to think I backed that lot in Europe when I was young (along with Forest, Ipswich, Villa).

Basically, I’m intrigued with Arsenal. What the hell are we up to? For somebody who wears his heart on his sleeve watching them (and has done since the age of four!) I actually find it quite amusing. We ‘aint going to win anything so let’s play confusing, scary, gifted, stupid, non discript football…. you have to admit, we ‘aint boring !
Chris, Croydon

Pissing in the wind
So, with the unsurprising news that fans are going to be shafted yet again by broadcasters’ match choices over Christmas, might I make this suggestion for how TV packages should be sold in the future:

Without fans, the product they show would be worthless.
Greg, Taunton

In’t Bundesliga brilliant
Reply To Paul (Auf geht’s Eintracht), Frankfurt: Bayern has won the Bundesliga 8 times over the last decade, I don’t see your point about the league being competitive..

I thought Oktoberfest was over!
Chris Toronto (Gooner)