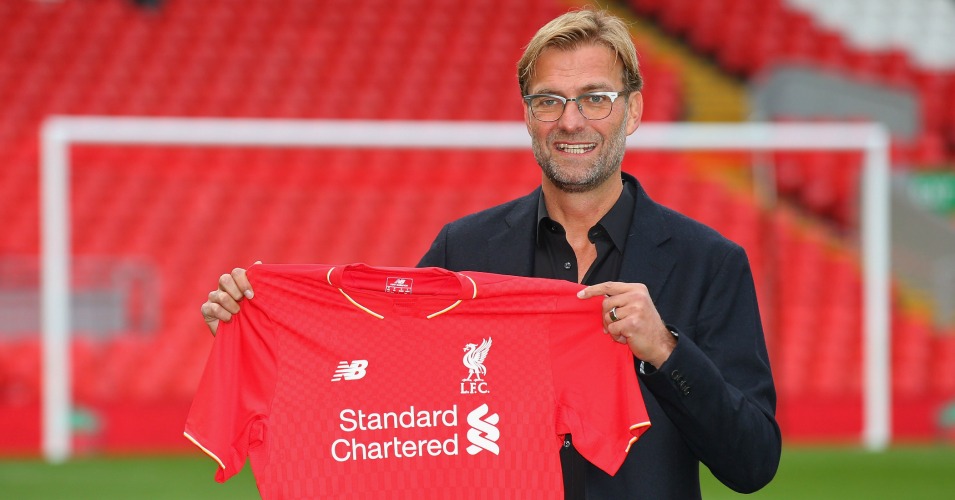 Klopp was appointed on a three-year deal late on Thursday, and after conducting his first interview as boss with LFC.TV earlier, the German was unveiled to the press for the first time at Anfield.

Klopp began by apologising for his English before saying, in perfect English: “It is the biggest honour I can imagine to be here. It is the perfect moment to come here and I am proud.

“This is the perfect next step for me to be here and try to help.”

“It’s a good moment to come here and I feel very proud. It’s how the people here live football. It’s a special club.”

Asked on the trials and tribulations of the Premier League for a manager who has only tasted Bundesliga management, Klopp responded: “This is one of the big problems you have here at Liverpool. Five, six, seven clubs can be the champion but only one can be the champion, the rest are disappointed.

“We have to develop, this is the start. This could be a good moment for a restart. It is only important that we play our own game, we need to feel the confidence and the trust of the people.

“It is important that the players feel the difference from now on, that they can reach the expectations. We have to change from doubter to believer.”

Klopp was then asked on the transfer committee at Liverpool which has been blamed by some as the downfall of his predecessor Brendan Rodgers. Despite reports that the German would refuse to work under such a structure, Klopp says he was happy as he long as he has the last say on deals.

“It was not a problem for 10 seconds,” Klopp said. “We talked about it. For me it is enough that I have the first and the last words. We only want to discuss about very good players. I’m not an idiot, I don’t know more than the rest of the world. I need the people who get the perfect information.”

Ian Ayre: Carra and Gerrard will be up to Jurgen. No plans as yet. #LFC

Klopp has previous at Anfield, having led his Borussia Dortmund outfit to Merseyside for a pre-season friendly in 2014. Klopp admitted that he had dreamed about managing the club since then and felt like a “lucky guy”.

“I’m a football romantic. I love all the stories. Anfield is one of the best places in the football world,” Klopp said.

Despite their current standing of 10th in the Premier League, the Reds sit just three points away from the top four, which is understood to be the expectation at Anfield this season. Klopp insisted he can handle such expectation, as can the existing squad.

“You do not carry the weight of history like a 20kg backpack. I want to see the first step next week but don’t compare with other times.

“We start to play very emotional football, that is important at Anfield. You could have the best atmosphere in the world, then you play like this. It doesn’t work.

“It’s time to restart, that’s for sure.”

Asked to describe himself, Klopp replied, with more than a nod to Jose Mourinho: “I am a totally normal guy. I am the normal one.

“I hope to enjoy my work. Everyone told me about the British press so it is up to you to show me they’re all liars.

“It would be nice to stop taking photos of me when I move from one side of hotel room to the other. Let’s concentrate on football.”

Following on from the ‘death by football’ philosophy of Rodgers, Klopp was keen to put across the main point of his own playing style, before discussing the “surreal” nature of his swift appointment.

“Emotion inside, speed. Transition game. You will see this,” Klopp said. “All the things that make football interesting to me, I want to see on the pitch.

“I woke up this morning and I was manager of Liverpool FC. I am really a normal football manager, I want to work with the players. This is absolutely crazy what has happened.

“If I sit here in four years, I am pretty confident we will have one title,” Klopp added. If not? “Maybe Switzerland.”