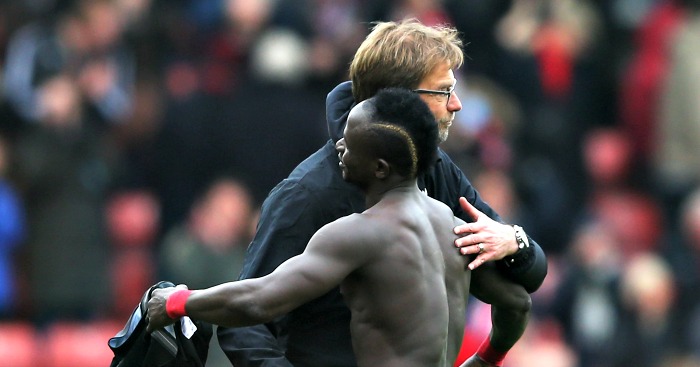 Jurgen Klopp has claimed that his mistake in not signing Sadio Mane for Borussia Dortmund has worked out well for Liverpool.

The Reds manager spoke to Mane when he was manager of Dortmund and the Senegalese forward was playing for Red Bull Salzburg.

He snubbed the chance to sign Mane and he joined Southampton instead for £11.8m; two years later he joined Liverpool for £34m.

Mane faces his old club Southampton for the first time on Saturday afternoon.

“It was a pretty simple decision with Sadio this summer because I made the mistake at Dortmund where I didn’t take him,” said Klopp.

“We met each other, we talked but by the end I didn’t feel this [strikes hands together]. About three months later I would have punched myself, so I already knew that the next chance I have, I would take it. So it was not a difficult decision.

“When the club came this summer and Michael Edwards [Liverpool’s new sporting director] said we have an opportunity there were no talks necessary any more. It was a case of: ‘Let’s do it.’

“I don’t know why I didn’t sign him before. I like the player, it was more of a feeling. At Dortmund we could only get one player for this position, not two or three, so it needed to be exactly the right fit in this moment.

“I have made more mistakes in my life like this but he would have been more expensive if we had taken him to Dortmund and then he had been sold to Liverpool, so all good for Liverpool.

“The more I think about it, that was my first Liverpool decision. Nice.”