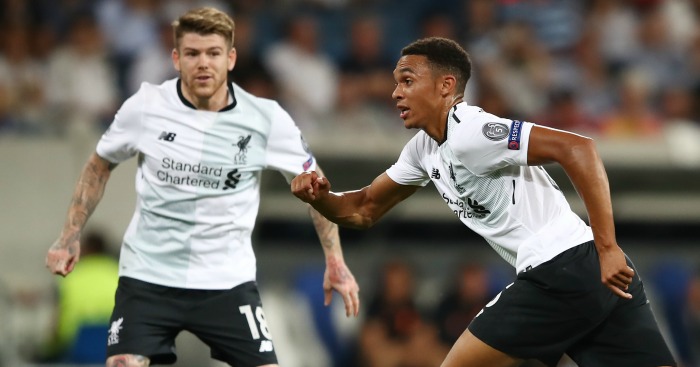 Liverpool manager Jurgen Klopp praised the character of Trent Alexander-Arnold after the teenager scored a brilliant free-kick in their 2-1 Champions League play-off win over Hoffenheim.

The 18-year-old stepped up ahead of more senior colleagues to whip in a set-piece and open the scoring with his first goal for the club on his European debut. Will children be imitating him in years to come as he did Steven Gerrard?

Hoffenheim’s late strike from Mark Uth came from Alexander-Arnold’s side of defence after James Milner’s cross had deflected in off Havard Nordtveit to make it 2-0, but Klopp accepts the youngster is still learning and was more interested in what he can do rather than what he cannot.

“I have to say, for an 18-year-old to have the balls to kick a free-kick is better than the mistake,” he said.

“He is an incredible young player. It was actually because I told him he had to do it – he was the only one who can. He can shoot free-kicks better than I ever could.

“I told him because I watched him many times for the Under-23s last season and he took the free-kicks – and the goal is the same size.

“There is a big challenge after training for free-kicks between him and Ben Woodburn (the club’s youngest scorer, who does not turn 18 until October).

“It helps the manager tells him (to take it). It was very important and very good for us.”