Home All The News Klopp: Van Dijk told me he should have had a hat-trick 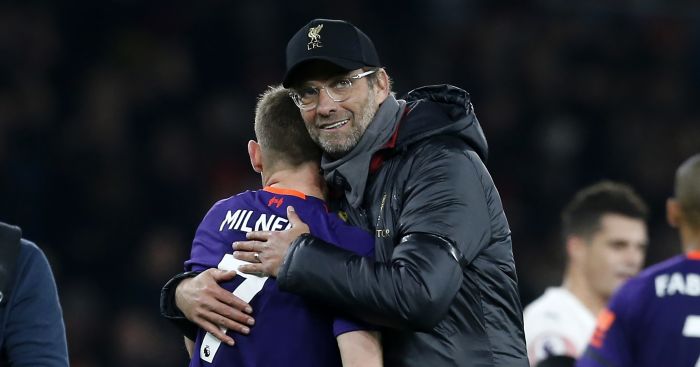 Jurgen Klopp thinks the rest of his Liverpool side put “too much” pressure on their midfielders during their 1-1 draw at Arsenal on Saturday.

The Reds threw away a 1-0 lead when Alisson came out of his net to close down the angle for Alexandre Lacazette but the Frenchman found a way to squeeze the ball into the net.

That effort cancelled out James Milner’s 61st-minute strike when the ball dropped to him just inside the area.

“A point is a good result, Emery can say the same, but we had clear chances,” Klopp told BBC Sport. “When Arsenal chase the game they throw everyone on the pitch which is really cool and we were not as compact as I wanted.

“Our workhorses in midfield, we put too much on their shoulders. And it was one time we didn’t close Alex Iwobi and he plays the pass for the goal.

“They had a few chances for sure, it’s a home game for them. They are in a good moment. We got a point, we deserved a point and we could have had more. I don’t feel like we dropped two points.

“I saw Virgil van Dijk after the game and he said ‘I should have had a hat-trick.’ I was not a good football player but I was good at heading and today I would have scored three.”