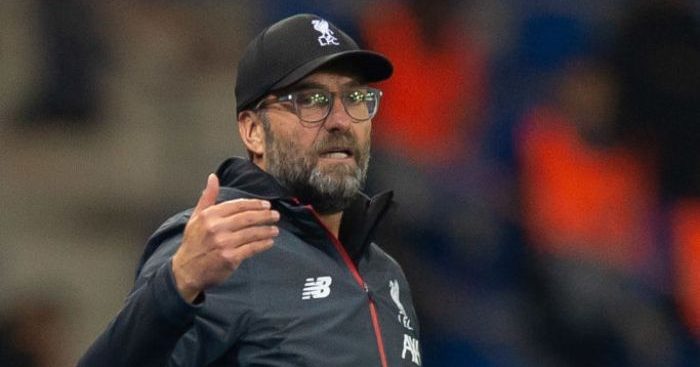 Jurgen Klopp has called on Fifa and Uefa to sit down with the world’s top coaches and discuss the “crazy” demands being put on modern footballers.

The Liverpool boss is attempting to navigate his own fixture pile-up with the prospect of their Carabao Cup meeting with Aston Villa being pushed back into January because of the Club World Cup.

But Klopp believes there is a wider problem, with more international tournaments being added to the calendar and the expansion of the Club World Cup from 2021.

“There should be a meeting with five to ten top managers in the world, Fifa, Uefa and the CEOs of the big leagues,” he said.

“They discuss it and everyone gets the same vote. Just talk about the game again. The game has grown in the last couple of years and I get that…it is a business, we are part of that and we get the benefit of the business 100%. But it grew so much because of the quality of the players.

“Our part of it is to help players fulfil their potential. That only really works with training but in modern football a manager has no time for training any more. You have a pre-season which is disrupted by pretty much everything and for the last 10 days you have your whole squad.

“The biggest benefit this game could get is to give these really good coaches out there more time. This game could be improved unbelievably again to the next level if we had a period in the year when we could really train together.

“This Club World Cup in 2021! What? You could have someone in the Champions League final and five days later it starts. A week after that competition finishes we have the African Nations Cup. Do we play the Club World Cup without any African players? Fifa would insist they go for two weeks before the tournament starts to train with their international teams.

“Nobody thinks about it, they just put another competition in. In 2020 we have the Copa América again. There was one this year! The schedule for the boys involved in these tournaments is just crazy. My job is to deal with it but you cannot deal with it, you just accept it and try to make the best of it. If it continues like this then what direction will it lead?

“We already squeeze every minute out of the 10 days we have together in pre-season as it is. I am not moaning, I am describing the situation. Somebody thought the Nations League was a good idea. Nobody sits around a table and discusses it.”