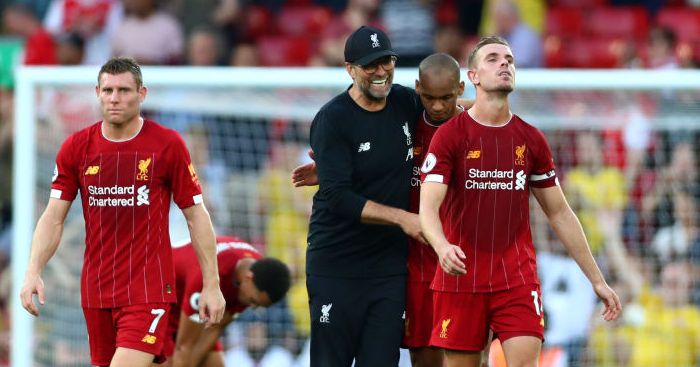 Klopp out
As the current fourth longest-serving manager in the Premier League and eighth most-tenured in the Football League overall, Jurgen Klopp is something of a rarity. The only other non-English head coach in the top ten for the EFL is Mauricio Pochettino, whose own future has been a constant point of speculation.

Common sense dictates that Klopp, who had spent his entire 28-year playing and coaching career in Germany before he was appointed at Liverpool, will return to his native country before long. And a Champions League trophy and all-time great Premier League season suggests he will leave them in good stead when he eventually does.

But his latest quotes have generated ‘fears’ over his future on Merseyside. The silly bugger has ‘set alarm bells ringing by casting further doubt’ on his plans.

Let The Sun, who obviously have the inside track on all goings-on at Merseyside, fill you in.

‘The German admits he would take a year off to recharge his batteries when his current deal expires.’

‘Klopp signed a contract extension until 2022 three years ago. The Reds’ owners, Fenway Sports Group, are keen to tie him down to another.

‘He joined Liverpool in 2015 and having spent seven years at previous clubs Mainz and Borussia Dortmund, there are already fears he could walk away.’

‘Already?’ When Liverpool appointed him Jose Mourinho was in charge of Premier League champions Chelsea. It was a bloody long time ago. Get out of here with your ‘already’.

And again, are there really ‘fears’ that someone could ‘walk away’ when they are no longer contracted to stay?

What are these quotes, anyway? The Sun handily provide them in the copy.

‘And now when asked if he would take some time off after he finishes at Anfield, Klopp told German magazine Kicker: “It looks like it. Who can now say if he can give it his all in three years’ time?

‘”If I decide I can’t go on, I’ll take a break and in that year I’d have to make a decision. But the chances are very high my energy levels will go up again after a year’s break.”‘

So this is no mistranslation: you know full well he’s discussing taking a sabbatical when his contract expires in 2022, not leaving early for a year off.

Liverpool would obviously rather not lose one of their best and most popular modern managers. That’s a given. But he’s giving them a full three years to plan and prepare for the possibility of him leaving. Those alarm bells are barely humming, never mind ringing.

No doubt
On that note…

Literally the only thing he said was that he will probably take a sabbatical in 2022. It is 2019. Since when did ’employee confirms he will honour contract’ become a ‘confession’ that ‘casts further doubt’?

If anything, he’s cleared the doubt up.

That is something special.

Silva lining
When not manufacturing panic over Premier League managers, The Sun like to accuse others of ‘righteous indignation’. Pot, kettle, black and all that.

‘There was much righteous indignation from Watford when they accused Everton of trying to ‘tap up’ Marco Silva.’

Absolutely, Neil. Those silly sods at Watford should have sat back and let a direct Premier League rival poach a manager they had literally just appointed on a two-year contract.

‘The Hornets felt that the Portuguese boss should have shown them loyalty rather than having his head turned.’

Well the Hornets actually felt that the Portuguese boss suffered “a significant deterioration in both focus and results” – which he did – with Everton’s approach “the catalyst” – which it was. So they were blaming the club rather than the manager.

‘So now that Javi Gracia is presiding over a sticky patch, will Watford show such loyalty to a man who guided them close to European qualification in both league and FA Cup last season? We’ll wait with interest.’

Are you trying to imply that Watford sacking someone who has overseen a run of 31 points from 31 games dating back to November would be hypocritical because they also parted ways with someone who won six of their first 13 games, then one of their subsequent 11 after having their head turned?

Sounds sensible – patient, even – to us.

Simon says
Sensible and patient are not words one can attribute to Simon Jordan, nor to talkSPORT. The radio station were clearly so impressed by his bizarre and inaccurate character assassination of Daniel Sturridge that they asked the former Crystal Palace chairman back for his views on David Luiz:

‘The press were going “Who has had the best transfer window? Maybe Arsenal have”.’

“Anybody with half a brain, with respect, looks at David Luiz and says ‘Why do you want that in your dressing room, as a centre-half, when you’ve got a defensive unit that’s not a unit?'”

Why, indeed, would you want a Premier League winner in your dressing room for £8m when you need to replace your experienced captain?

“He’s a flat-track bully at best, we saw him fall apart for Brazil, he’s lightweight and a show pony.”

A “flat-track bully” who played the full 120 minutes of the Champions League final with an injury. A “lightweight and a show pony” who scored in the subsequent penalty shoot-out victory.

“He’d probably be better pushing him into a central midfield role because he might have the wherewithal to put his foot on the ball there and provide a little bit of steel there.”

Thought he was “lightweight”? Do “show ponies” really “provide a little bit of steel” anywhere?

“But not in central defence. His responsibility starts and begins with himself as far as he is concerned.”

This from the man who said Sturridge was “a divisive influence” who he “wouldn’t want” in his dressing room. What does Simon Jordan have against footballers he has literally never met but loves to brand selfish and self-centred?

Collymaths
From the studio that brought you:

‘The vast majority of your players are still those Arsene Wenger left and that means your side will win 90 per cent of their games and lose the other fixtures they’re expected to lose, that means no titles.’

…is the third part of the Collymaths sequel.

‘I take my hat off to Steve Bruce for Newcastle’s win at Tottenham. I was highly critical of the Toon boss on the back of their 3-1 defeat by Norwich and rightly so.

‘It looked as though there had been words in the week and as a result their work-rate and defending were A1.’

‘If Bruce can get 60 per cent of that effort over the season then they will stay up, but if his side play like they did at Norwich, they will struggle.’

That is a delicious amount of numerically arbitrary nonsense.

Tenuous introduction of the day
‘Mauricio Pochettino is going to have to shake up his lemons this week – on and off the pitch.

‘Tottenham’s universal energy-loving boss famously keeps bowls of lemons around in a bid to get rid of bad vibes.

‘But for a club meant to be mounting a title tilt, there is a lot of bitterness about.’

Paul Jiggins of The Sun there, making our teeth itch.

Recommended reading of the day
David Squires on Bolton and Bury.