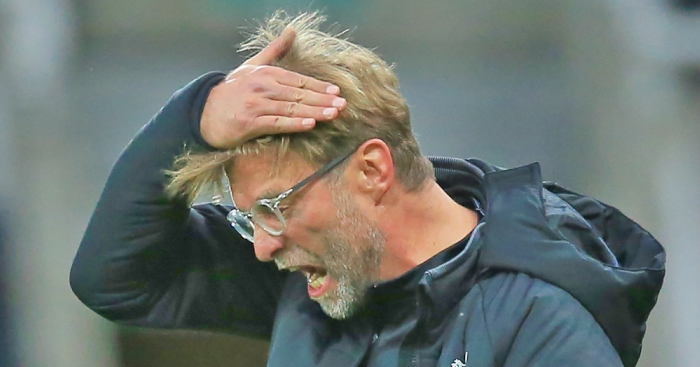 Those were words spoken by Jurgen Klopp after Liverpool had beaten Norwich by that very scoreline at Carrow Road in January 2016. Liverpool’s manager described his enjoyment of the “wild, good football”, but preferred to focus on the frustration of individual mistakes and a collective lack of concentration, particularly on set pieces.

After 108 days in the job, Klopp had diagnosed the issues that had done for his predecessor. Twenty-one months later, he is still struggling to solve them. Liverpool’s 63 Premier League matches since Carrow Road have merely been an extended version of those 90 minutes. “Wild football” does not always mean happy endings.

Realising that Liverpool have the second most clean sheets of any Premier League club over their last 15 games is the type of statistic that makes you question the movement as a whole. Curse those lies and damn lies.

But there they are: Manchester United 10, Liverpool 8, Manchester City 8, Arsenal 7, Chelsea 7 and Tottenham 6. Liverpool are second only to Jose Mourinho’s pragmatism, dogmatism or whatever other -tism places victory so far above entertainment that the manager is prepared to argue the point with his own supporters.

The disbelief says it all, and the sample size is large enough to confirm everything we already know about Klopp’s Liverpool. When they are good they are very, very good, and when they are bad they are dismal.

Examining those 15 matches only emphasises just how baffling this Liverpool team of contradictions is. They scored three or more goals in six games, yet only scored 26 in total. They kept eight clean sheets, yet still conceded 18 in total. Part of this job is praising teams when they perform well and admonishing them when they fall short of expectation. Liverpool veer so quickly between the two that even the expectations themselves are hard to establish.

If that all makes Klopp’s team an intriguing story – perhaps even the intriguing story – for neutrals, it provides little platform for a meaningful title challenge or even top-four bid. Manic performance is not an attractive trait in a successful sports team; dependability is. Watchability is a characteristic of failure, as Mourinho might say. Or ‘you only go on about style because you didn’t win’.

For all those clean sheets, predominantly earned at Anfield, the standout feature of Klopp’s Liverpool is their susceptibility to defensive collapse. That was most recently displayed against Tottenham at Wembley, but the list is long: Manchester City after the sending off of Sadio Mane, Watford in August, Hull in February, Swansea in January, Bournemouth in December of last season. The examples come almost at a monthly rate.

Shambolic collapse to Sevilla in the Europa League final in 2016 is perhaps the most infamous occurrence of what Barney Ronay in the Guardian labelled as Liverpool’s ‘anti-defending’ a fortnight ago, and that description has some merit. It is not that Liverpool play badly for these periods of 20-30 minutes, but that they don’t play at all. No defensive shape, no communication, no bravery, no composure. “Wild football” again, but of a very different kind.

After the second-half capitulation against Manchester City, Klopp marked it down as “one of those days”, yet there are far too many of those days at Liverpool. Like Arsenal, they have perfected the art of taking one step forward and another back, never standing still but yet never moving in either direction. Chaos theory is wonderful to watch, but hardly points to sustainable progress.

One interesting thing to note is that Liverpool on the pitch are a reflection of the Klopp parody at its side: the manic touchline caricature that hugs and screams and shouts and jumps and sprints and moans and loses his glasses. Yet away from the pitch Klopp is far more analytical and composed, obsessed by the minutiae of training and the psychology of his players. Is his pitch-side demeanour just a symptom of the problem, or part of the cause?

At least partly, Liverpool’s problem is one of style and personnel. They typically play a 4-1-4-1 system that expects the full-backs to get forward, but utilises Jordan Henderson as the most defensive-minded midfielder by default rather than design. Henderson made only four tackles in 270 minutes against Manchester City, Tottenham and Manchester United this season. With Coutinho and Lallana playing in front of him in a full-strength Liverpool team, he is a one-man protection for a creaking defence. If Henderson plays poorly, even for a period of 20 minutes within a game, Liverpool are in trouble. His flaws are magnified by his importance.

Yet there is another similarity with Arsenal: Klopp’s team lacks leadership. Not of the chest-beating, blood-pouring kind, but players who will take responsibility when the team is under pressure, who won’t make mistakes and help their teammates avoid them too but will cover for them if and when they do. Who is Liverpool’s leader? Henderson? Joel Matip? James Milner?

For all the replication of Dortmund’s pressing at Anfield and Klopp’s insistence that the team spirit of that Dortmund squad is mirrored at Liverpool, Klopp’s Bundesliga team could also dig in. Dortmund conceded more than two goals in a league game just three times in Klopp’s final two seasons in the Bundesliga, the same as Liverpool have in ten league games this season. Even as things went awry in 2014/15, Dortmund rarely collapsed.

“It is not serenity football, it is fighting football – that is what I like,” said Klopp in 2013 when still in Westphalia. “What we call in German ‘English football’: rainy day, heavy pitch, everybody is dirty in the face and they go home and can’t play football for the next four weeks.” And yet it is precisely in these games, against weaker opposition who are prepared to fight, that Liverpool have wilted. This is where Klopp has been particularly disappointing. He talked the talk but has not walked the walk.

“I think he likes having the ball, playing good football,” said Klopp of Wenger’s Arsenal in that same interview. “It’s like an orchestra. But it’s a silent song. I prefer heavy metal.”

Given how much that last line has stuck with Klopp during his time in English football, there is a certain irony to the fact that Wenger’s Arsenal is the team his Liverpool now most resemble, both in terms of league position and personality. Both are capable of dominant attacking performances and entire months of supreme form, but collapse like a house of cards in torrential rain when the storm clouds gather.

“Consistency is the only way to be successful,” said Klopp in August 2016 on the eve of the season. “All of these big jumps in performance, up and down, don’t help. It’s possible because we are all human beings and things can happen that should not happen too often.”

Inconsistency is a trait that has been haunting Liverpool for long before Klopp arrived, not just game-to-game but minute-to-minute, but one that he was appointed specifically to fix. For all the talk of heavy metal and silent songs, it is melodic easy listening that Klopp now craves. He must soon learn to control his human beings.