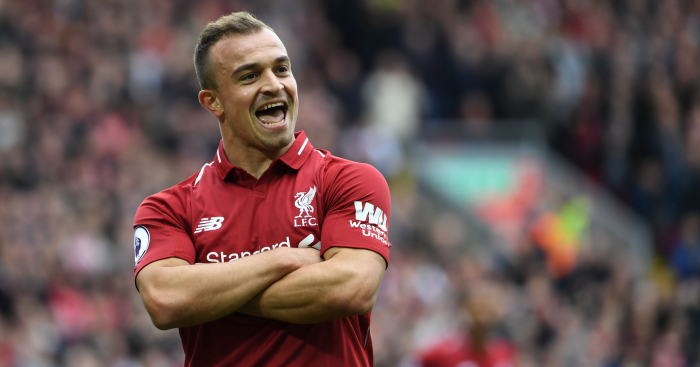 These statement signings cause widespread excitement almost by definition. Supporters and media have been indoctrinated into transfer market mania, and clubs must fight to keep up with the Joneses. When you buy the most expensive goalkeeper and central defender in the history of the game, their performance level automatically becomes a headline, for better or worse.

Finding success stories in Liverpool’s squad over the last 18 months is not difficult. Each member of the front three performed way above expectations last season. The rise of Trent Alexander-Arnold and Joe Gomez has been particularly heart-warming. The jump in defensive solidity caused by Van Dijk and Alisson has turned Jurgen Klopp’s team into potential title challengers. But it is the improvement in Klopp’s under-the-radar signings that perhaps deserves the most effusive praise. A trio of then-Championship footballers have generated the competition for places that often fuels consistency.

There’s plenty of logic in signing the cream of the relegated crop. If every Newcastle, Hull and Stoke player had the quality of Wijnaldum, Robertson and Shaqiri then their clubs would have stayed up. Relegation made them ripe for cherry-picking, and thus decreased their asking price. They were damaged but still desirable goods. All three arrived for less than Keita’s price.

Those cut-price fees reduce the pressure that can often strangle a more expensive signing. There is no such thing as a risk-free transfer, but when a top-four club spends £8m on a left-back or £13m on an attacking midfielder, expectations stay low. Here to help rather than here to lead. Everything becomes a bonus.

Klopp agrees. “Robbo we had a long think about,” he said this summer. “There were not 20 clubs who wanted Robbo. A left-back getting relegated and then coming here? He took the time, he used the time and now, if I was to sell him I would have more than 20 clubs wanting him. People would pay much more than we did now!”

Liverpool’s manager was discussing Robertson but, four days after signing Shaqiri, he could so easily have been talking about his new midfielder. If statement signings have to prove themselves worthy of lofty transfer fees, Liverpool’s relegated signings only had to prove that they belonged in their new surroundings. The fight for relevance can be a powerful motivator.

That fight was particularly important for Shaqiri, having attracted plenty of criticism during Stoke’s collapse into the Football League. Gary Neville accused him of going missing in matches and being “unprofessional” ahead of his move to Anfield. Rather than absolving Shaqiri of blame for Stoke’s relegation, Neville believed that he epitomised it.

Shaqiri has now either scored or assisted in five of his last six appearances for Liverpool. He has played only 307 of the club’s 1,080 Premier League minutes, but only Salah and Sadio Mane have contributed more goals and assists. Of all the Liverpool players to appear in more than one Premier League game, he is creating chances at the quickest rate. In his time on the pitch with Salah, Mane and Roberto Firmino, Liverpool average a goal every 23 minutes. Shaqiri has become a difference-maker.

In some ways Neville was right – Shaqiri is hardly the archetypal Klopp player. Against Fulham, eight Liverpool players completed more sprints and that’s a pattern that’s unlikely to change. But Shaqiri has also demonstrated that he is willing to learn new tricks: Only one Liverpool player has won possession more often in the final third. Klopp has been impressed enough to tweak his 4-3-3 to more of a 4-2-3-1 when Shaqiri plays.

Klopp is right too: There were not 20 clubs who wanted Robertson nor 20 clubs who wanted Shaqiri. He was a calculated risk, and risks can backfire. But therein lies the beauty of the unexpected signing who arrives without a price tag hanging like an albatross around their neck. With Liverpool’s front three yet to click, summer afterthought has become autumn masterstroke.