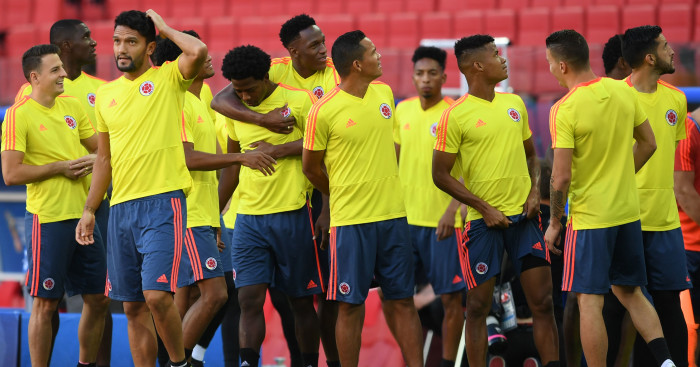 England face Colombia tonight for a place in the World Cup quarter-finals on The Weaker Side of the Draw. The giddiness remains, even if the balance has shifted in recent days to the extent that people insisting Colombia will be no pushovers now exceed those demanding at least a semi-final spot for England from here by almost two to one, according to the latest research.

But who exactly are Colombia? Who are the 11 brave souls who dare to take on Sir Harry of Penalties and the rest of the lads? How many of them have had brief and unsuccessful spells in English football?

Let’s find out, via a man-by-man look at Colombia’s likely starting XI, inevitable caveats about James Rodriguez’s calf notwithstanding. Here, in a 4-2-3-1, are the 11 men who stand between England and their rightful, God-given quarter-final spot.

David Ospina (Arsenal)
Goalkeeper who, along with fellow north Londonite Davinson Sanchez, is contractually obliged to be referred to as a “familiar face” by TV commentators tonight. Never the most convincing of keepers, yet also disappointingly mainstream for the country that brought us Rene Higuita. Because this stuff might be very important later: conceded all of his first seven penalties at Arsenal, but saved the last one he faced in the Europa League against Ostersunds.

Santiago Arias (PSV)
Six assists (and three goals) in 30 Eredivisie games for PSV last season have attracted the reported interest of Juventus, who have a Stephan Lichtsteiner-shaped hole to fill at right-back.

Yerry Mina (Barcelona)
Centre-back who joined Barcelona six months ago, is already being linked with a move to Liverpool (and West Ham), and his name goes in big, bold letters under the heading SET-PIECE THREAT in a tournament where these words have to be treated with the very greatest of respect.

Davinson Sanchez (Tottenham)
Arrived at Tottenham with a big reputation and club-record £42m transfer fee to match, but lived up to the billing. Remarkably assured at 22 – barely more than a foetus in centre-back years – and one of the very best young defenders in the world. Whatever other factors are at play, displacing Toby Alderweireld from any defence is some achievement.

Johan Mojica (Girona)
Attack-minded left-back who earned a permanent move to Girona this summer after helping the Catalans achieve first promotion to La Liga and then a comfortable mid-table finish in the top flight during a couple of loan spells.

Carlos Sanchez (Fiorentina)
Winty’s instructions for this feature were very clear: “Don’t dismiss them or make them sound too sh*t or it’ll look like typical English cocky bollocks.” Fair and correct. But how then to, ahem, handle the case of the former Aston Villa ace? Like this: Carlos Alberto Sanchez Moreno (born 6 February 1986) is a Colombian professional footballer who plays as a defensive midfielder for Italian club Fiorentina.

Mateus Uribe (America)
Mexico-based midfielder earned his first start of the World Cup in the 1-0 win over Senegal and looks set to retain his berth for the last-16 clash. Don’t think we’re in too much danger of veering into tabloid IT’S COMING HOME jingoistic buffoonery in suggesting this central midfield pairing might not be Colombia’s greatest strength.

Juan Cuadrado (Juventus)
Had a lacklustre spell in the Premier League with Chelsea – a blight from which no other career has ever recovered – but is now a key creative influence for both Colombia and Juventus. Five goals and six assists in Serie A and the Champions League last season despite an injury-hit campaign. An obvious threat from open play, his pace and trickery also draw plenty of fouls, which is handy for a team with so much set-piece threat. Set to give Ashley Young his first serious examination of the tournament.

Juan Quintero (River Plate)
Colombia’s star of the show in Russia thus far with James Rodriguez’s contributions restricted by injury. A goal and two assists is a fine return after the group stage, and he is the reason England will have to be careful around set-pieces. The sort of proper, mercurial, stocky, infuriating and delightful No. 10 that your modern football was supposed to have left behind, and clearly about to be linked with a big-money return to Europe at every top-flight club in England and probably Spain as well after earlier spells with Porto and Rennes.

James Rodriguez (Bayern Munich)
The big pre-match question to be answered tonight. Will 2014 hero Bond, James Rodriguez be fit to start? It would be a huge surprise if he doesn’t play any part, and the noise so far this morning suggests that an inflamed but crucially not torn calf muscle could ease sufficiently for the Bayern Munich playmaker to take his place in Colombia’s gorgeous front four. If James doesn’t make it, then Sevilla’s Luis Muriel steps in. He’s not terrible, Muriel, but it would definitely be a significant downgrade.

Radamel Falcao (Monaco)
High-class striker who has successfully rebuilt his career after distressing setbacks with injuries and Louis van Gaal’s Manchester United. Returned to Monaco in 2016 after underwhelming loan spells with United and Chelsea and immediately played a key role in the Monegasques’ thrilling but all too brief dethroning of PSG and elevation to the Champions League elite. International record is…okay, with 30 goals in 76 caps.