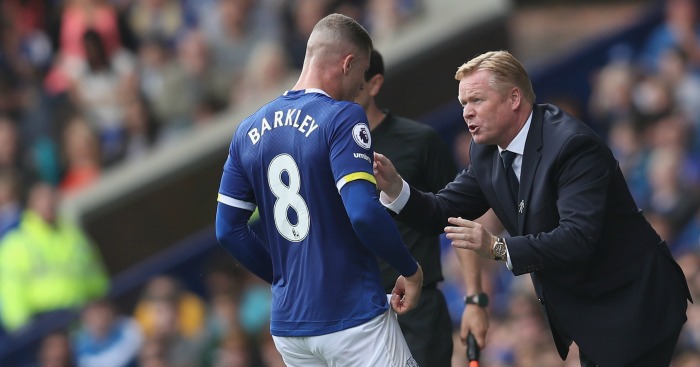 Barkley may be just 22 but he is already five years into his Premier League career having been earmarked for big things as a teenager.

After a brilliant start to last season his form tailed off and he was left unused by Roy Hodgson during England’s Euro 2016 disappointment.

With the possibility of a new start for both club and country – Sam Allardyce having replaced Hodgson and Koeman taking over at Goodison Park – Barkley has scored twice in his first three games of the campaign.

“He’s been positive, really positive,” said Koeman ahead of Stoke’s visit to Merseyside.

“The most important thing in this situation is the player really knows himself it’s a big season for him to show he is not any more that (emerging) talent.

“He knows about that pressure because he’s a local boy, that always gives more pressure. But I think he can handle that pressure and deal with it.

“That’s a responsibility for the player more than maybe it was the last two years. He’s working hard trying to improve and I think there’s still a lot of space to improve to be finally a very good player.”

Koeman does not feel Barkley’s frustrations with England, which would be assuaged to some degree should Allardyce name him in his first Three Lions squad on Sunday, should be the driving force behind his efforts.

“Sometimes you get outside inspiration but I think that mentality needs to come out of yourself, not that maybe he was disappointed with what happened in the summer,” he said.

“No. Start every day by doing your job, be professional. Of course you need help and the confidence of the coach, that kind of stuff, but it always starts with the player by himself.”

Koeman stated at the start of the season that some of his squad were only 70 per cent fit, with his pre-season work disrupted by internationals returning late from the Euros and transfer dealings continuing after the campaign kick-off.

He feels the squad are now closer to peaking but with new arrivals Ashley Williams and Yannick Bolasie both completing their first full matches in the midweek win over Yeovil in the EFL Cup, they may not be at their best this weekend.

“We are improving. With some players it’s all about that they didn’t get any game time in pre-season. Maybe they need one or two weeks more, to have international duty, to get everyone on the highest level you need to play Premier League.

“Normally that’s after the transfer window. “