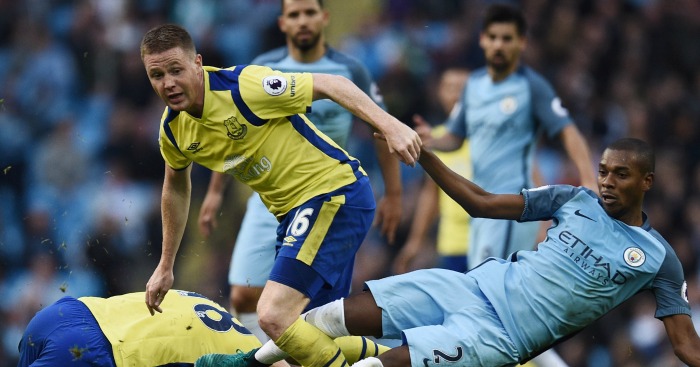 Everton boss Ronald Koeman has advised James McCarthy not to join up with the Republic of Ireland for their forthcoming match against Austria.

Toffees midfielder McCarthy, who has been nursing a hamstring injury, was on Wednesday named in Ireland’s provisional 35-man squad for the World Cup qualifier on November 12.

Koeman expressed his unhappiness about the 25-year-old’s handling by the Republic in early October, when McCarthy played one full international match and around 80 minutes of another, having not featured for Everton since August 23 because of a groin problem.

Since then the player has made one substitute appearance for Everton, then missed two games due to the hamstring issue that will also keep him out of Saturday’s away clash with Chelsea.

Koeman said after the last international break that McCarthy had been “massively overloaded” by Ireland – something refuted this week by their boss Martin O’Neill, who accused the Dutchman of “bleating” about the matter.

When asked on Thursday what he thought about McCarthy’s latest call-up, Koeman said: “The player is not fit. He is not involved in team sessions.

“I think to have a call-up, he needs to be close to being fit, but it is a little bit the same story as what happened last time.

“We spoke to James and my advice to him is to stay here, do training and be fit as soon as possible – but the final decision is by the player.”

Asked if he had spoken to O’Neill about the situation, Koeman added: “No, it’s not necessary, because we have the contact between the medical staff.

“If the manager does not take the right decision, maybe he can take the good advice of the medical staff.”

Koeman thinks the past few weeks have been a learning curve for McCarthy.

“We (he and McCarthy) spoke about this – what is the best, what we want and what I want,” Koeman said.

“I think finally the player by himself is the same – he likes to play for Everton and play good for Everton. Then, of course, you get your call for the international team. But it starts with playing for Everton.

“I think also the player by himself learned from what happened the last time, when he was overloaded and got another injury.

“The best for everybody is first be fit and train with your club, and then you are ready for the national team – not vice versa.

“It’s always difficult because the player is between Ireland and Everton. But I think, first of all, you need to do what is the best for your club.

“If you are fit, you play for your nation – he needs to be fit first. If not, he will struggle again.”

Koeman also confirmed goalkeeper Maarten Stekelenburg is available after missing last Sunday’s 2-0 victory over West Ham with a foot issue, but full-back Leighton Baines (hamstring) is not ready to make his return and forward Arouna Kone (knee) is also sidelined.

Midfielder Idrissa Gueye will miss out due to suspension, while it remains to be seen whether Koeman restores captain Phil Jagielka to the team after dropping him to the bench and replacing him in central defence with Ramiro Funes Mori.