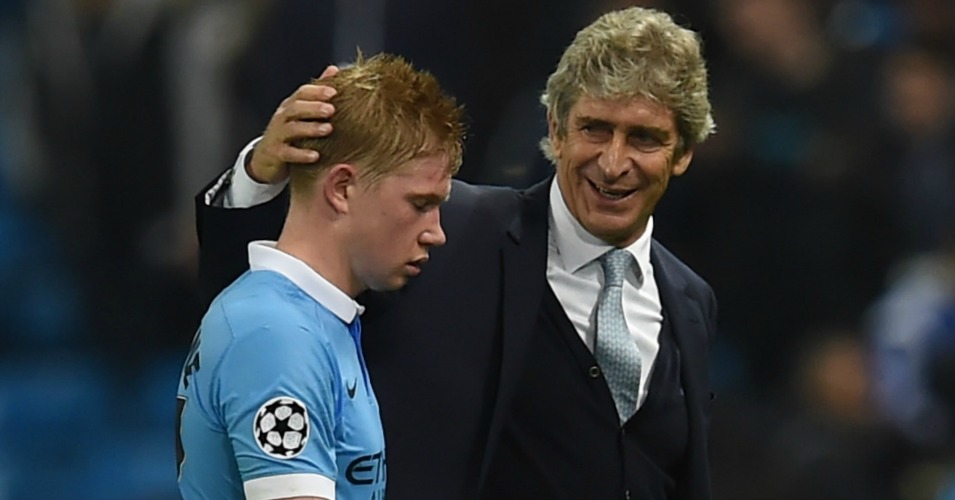 Manuel Pellegrini hailed Manchester City’s character after their Champions League win over Sevilla and said he’s happy with his team as Vincent Kompany again sat out.

Three weeks on from coming from behind in Germany to defeat Borussia Monchengladbach 2-1 with a late goal, City repeated the trick against their Spanish visitors on Wednesday night as Kevin De Bruyne’s stoppage-time strike sealed all three points at the Etihad Stadium.

Blues boss Pellegrini said afterwards: “I think that maybe there is a lot of criticism of this team in Europe but these two last games that we played in Europe reflect that we have the character to try to win.

“We will continue trying to improve our play, but for me, the character, concentration and intensity in Europe has been very important.

“When you win in the last minute it gives you more trust in what you are doing.

City had to dig deep to battle to a victory that leaves them with six points from three games in Group D, one point behind leaders Juventus, who were held to a goalless draw at home by Monchengladbach on Wednesday.

Sevilla took a deserved lead on the half-hour through their star man Yevhen Konoplyanka, and although an Adil Rami own-goal saw City equalise six minutes later, it took a long time for the hosts to really get going.

They looked vulnerable at the back for long periods, while Kompany spent most of the game watching, only coming on as a substitute in the last few seconds.

Pellegrini had left Kompany on the bench during Saturday’s 5-1 win over Bournemouth after expressing his unhappiness about the defender having played for Belgium in the international break due to concerns over his fitness.

Asked about Kompany after the Sevilla game, Pellegrini said: “I think (City’s starting centre-back pairing) Nicolas Otamendi and Eliaquim Mangala are playing very well, both of them.

“Vincent is just coming back from a long injury that kept him out for a month, and it was probably a risk to give him the responsibility to play in this important game.”

Asked if he would be sticking with the Otamendi-Mangala partnership for Sunday’s derby match at Manchester United, Pellegrini added: “Tomorrow we will start thinking about the derby and we will see the way the players recover.

“We have a lot of different things to think about for the next game. I am happy with the team.”

When City did start to get a grip in the second half against Sevilla – with Pellegrini having made some adjustments – De Bruyne was very much to the fore, and he duly delivered the winner with a cool slotted finish from Yaya Toure’s pass.

De Bruyne has been hugely impressive since his big-money arrival at City in August, and Pellegrini said of the Belgian: “We bought him because we thought he is a very creative player, he has goals and because this team tries always to play attractive, offensive football.

“So I think in all senses, he was the perfect player to arrive in our team.”

Looking ahead to Sunday, Pellegrini added: “It is always good to arrive into the derby winning the game you played before.”