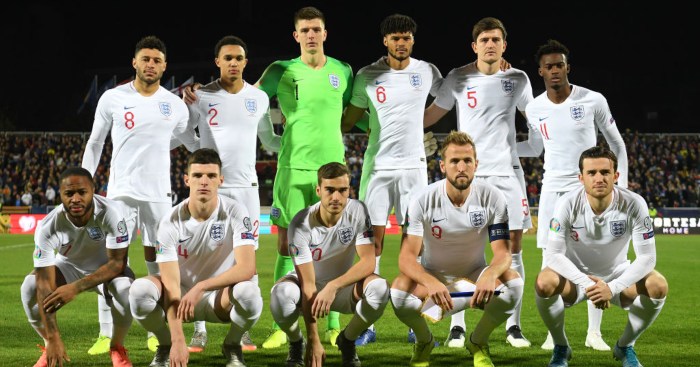 NICK POPE
England’s defensive concentration let them down at times, but he wasn’t among the culprits. Other than the little slip towards the end, this was an assured first start and everyone can afford to feel secure about the goalkeeping depth.

The trouble for Pope will be his distribution. He’s not necessarily an inferior goalkeeper to Jordan Pickford, but he’s a man out of time with the ball at his feet and Gareth Southgate will always want Pickford’s footballing abilities in that position – and rightly so, given what they’ve helped the side to achieve in the past.

TRENT ALEXANDER-ARNOLD
The case for him being England’s first choice is overwhelming on the basis of his club form. Unfortunately, he’s yet to produce a performance for his country which doesn’t look like this one did – distracted, inaccurate, lacking in the locked-in intensity which seems as standard at Liverpool. His time will come, most definitely, but he’ll have to be much, much better than this before it does.

HARRY MAGUIRE
Fine. Occasionally a bit haphazard with his clearances and his passing wasn’t quite what it can be, but he’s going to start next summer and nothing which happened here will change that.

TYRONE MINGS
The next step is to find out whether he’s credible against a better standard of opposition. So far so good, though, because this was another generally positive evening which showed the value of having a left-footed player at centre-back.

There’s something in that symmetry. It opens the field a bit more, it creates a bigger area for pressing players to cover and the opportunity to chop passes into midfield is all the greater as a result. Again, maybe Kosovo’s limitations exaggerated this, but England didn’t seem to get quite as stuck in their own defensive zone as they sometimes have done.

BEN CHILWELL
What a lovely player he is and now, clearly, England’s first choice left-back. This was never the kind of game which he was going to have to really influence, but he had a visible first half-hour, timing his runs forward well and putting in a few excellent crosses. Neither Luke Shaw nor Danny Rose is anywhere near him anymore, so stamp his passport for…wherever England are headed at the end of the season.

DECLAN RICE
The instinctive reaction would be to say that – maybe – he isn’t really good enough and to present this game as further evidence of why. As mentioned in the commentary, he and Harry Winks are probably competing for one place and, unfortunately, Winks receives and uses the ball to a much higher standard.

Rice’s job was to provide stability and, in this kind of game, that’s a very limiting role. A hiding to nothing, even. But he’s still yet to show the kind of authority that England need in that position and, that late tracking run to block Rashica’s shot aside, this was another jittery audition.

HARRY WINKS
A first international goal, which was nice, but it was interesting to see him roam that far forward to score it. Tottenham fans would probably argue that he doesn’t run beyond the defence often enough, but Southgate has him doing it – and making lovely first touches when he does.

It prompts an interesting discussion about his future. His timing was a little off at times, he didn’t quite synchronise with England’s attacking players as he might have done, but that really just described the lack of familiarity between them. This wasn’t a night for acid tests, but this was arguably his most complete – and most encouraging – performance yet.

ALEX OXLADE-CHAMBERLAIN
One of several England players who struggled with the pitch, but who adjusted well as the game wore on. And well enough to create the first goal with that disguised pass to put Winks through on goal.

Interesting, because he’s not generally known as a subtle player, nor is he ever mentioned as a candidate to play the No.10-ish role he occupied this evening. And the reason for that gradually revealed itself across the evening: that assist was his one real moment of poise, with his touches becoming increasingly flustered.

The theory of him occupying that position is fine. It works and it makes sense. The reality is that he just isn’t quite good enough when he’s under pressure or when the margin for error with his passing is too slender.

RAHEEM STERLING
A performance to describe his international break, littered with the kind of bad decisions which used to plague his game. It’s not something to ascribe too much significance to and there was some reassurance in that late assist for Marcus Rashford, but he looked worn down by a strange week.

CALLUM HUDSON-ODOI
He’s hit a rough patch of form – perhaps a post-injury lull – and his decision-making really wasn’t the best. But his value was still obvious and he produced a couple of runs – the one across the edge of the box in particular – which reminded everyone of just what he might be for England in the future.

He’s different to Jadon Sancho and more creative than Marcus Rashford and having that variation around Kane and Sterling hardly hurts.

HARRY KANE
Quietly very good. He caught some strange grief for his hat-trick against Montenegro, mainly because he undermined a point that the analytics types were trying to make, but he spent the night showing the other side of his game, serving as the pivot around which most of England’s best work occurred.

A well-taken goal to add to the tally and – if such a thing exists – a late captain’s assist for Mason Mount’s first international goal.

MARCUS RASHFORD (SUB)
Hard to judge his real impact, given how dramatically the Kosovan performance wilted in the second half, but still took his goal with the kind of confidence which he never quite seems to have for his club. An excellent finish.

MASON MOUNT (SUB)
Also took his goal very well. He’s still growing into this level – as he is senior football in general – but that will help. His performances have been a bit muddled so far and lacking in the kind of conviction which has benefitted Chelsea, but hopefully that will prove a settling moment.

FIKAYO TOMORI (SUB)
Perhaps this was a game for him to start? He’s more of a replacement for Mings than he is Maguire – there’s that left foot again – but his Premier League form warranted more than just a few minutes.