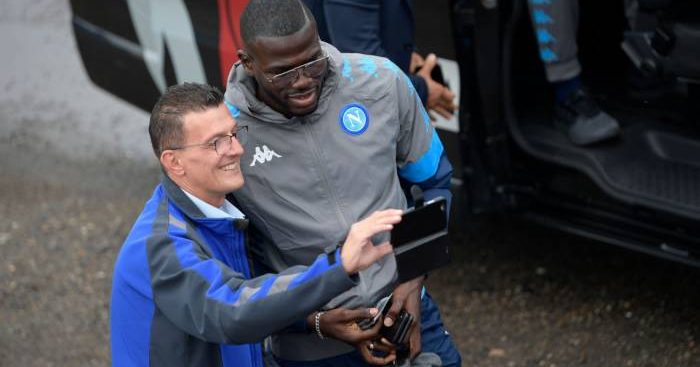 Kalidou Koulibaly has no time for speculation linking him with a move to Manchester United and wants to concentrate on winning the Serie A title with Napoli instead.

The towering Senegalese defender was linked with a move to United all summer long, with the Red Devils prepared to spend lavish sums on the Napoli powerhouse.

And despite the world-record defensive fee spent to lure Harry Maguire from Leicester this summer, the centre of defence continues to be a problem area for United this season, with the pressure seriously mounting on Ole Gunnar Solskjaer on the back of the club’s worst start to a season in 30 years.

Fresh reports this week have again seen Koulibaly’s name mentioned as a target for United, who allegedly want to pair him up with Maguire to form a mean defensive unit.

However, when questioned about the latest speculation from Senegal’s training camp, Koulibaly was having none of it and insisted his priorities remain with Napoli.

“I’m used to it. So many come out each day, which say I’m leaving. Right now, my only objective is to win with Napoli. I don’t care about the rest,” Koulibaly said.

Napoli are already six points behind eight-time defending champions Juventus and the player admits closing down the gap at the summit remains his only target.

“Our objective remains to beat the best teams in Italy and win the Scudetto,” Koulibaly continued.

“This season is more difficult because all the teams have got stronger and Serie A has become more competitive.

“I haven’t made the best start to the season. Juventus remain the team to beat. For our part, we must work even harder, improving our game to get closer to them.

“Our objective is to qualify for the Champions League knockout stage as soon as possible.

“We started well by beating Liverpool with a top performance. We regret not beating Genk, but that’s football.

“We must think positively and be aware that we can do well. My objective is to help the club and team win a trophy now.”