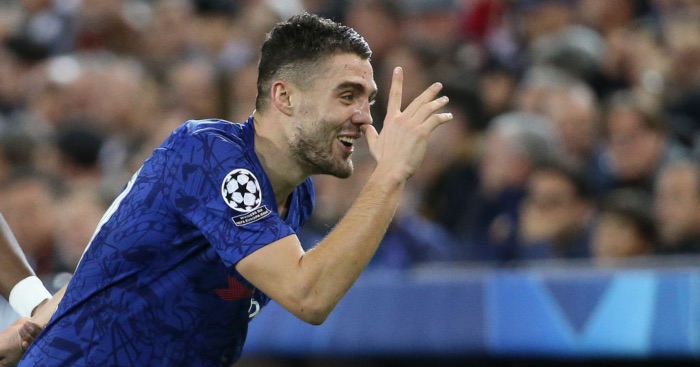 Chelsea midfielder Mateo Kovacic has revealed his ‘silly gesture’ goal celebration is for his two nieces, one of whom has Down’s syndrome.

Kovacic, who signed for Chelsea on-loan in the summer of 2018 before making the move permanent in the summer, failed to score throughout the entirety of last season.

But the Croat broke his Blues duck in the Mestalla last month against Valencia with a sweetly struck effort, and followed that up with a ‘silly-hand’ to the nose – now, the 25-year-old has divulged why.

“I’ve had the celebration prepared for a while because I didn’t score last season!” Kovacic told the official club website.

“It’s actually for my nieces. I have two nieces, one of which has Down’s Syndrome, and they do that [hand action] with me a lot.

“I love her a lot and the celebration was for them.

“It’s nice when you score and you can celebrate with the family. They have waited a long time but now I hope I can continue like that.”

Before that strike in Europe on November 27, his last goal came just under three years ago for Real Madrid.

“Last season I was obsessed a little bit [with not scoring] because people were always asking when I was going to score,” Kovacic added.

“He [Frank Lampard] has joked about that before but I also think he was being serious, because he knows I should score more goals.”

Kovacic, who has made 23 appearances so far this season, will likely play in Chelsea crunch game with Lille at Stamford Bridge.

Frank Lampard’s side know a victory against Lille at Stamford Bridge will be enough for the last-16, and the Blues have been handed a boost after the Lille boss revealed he would be playing a “rested side”.