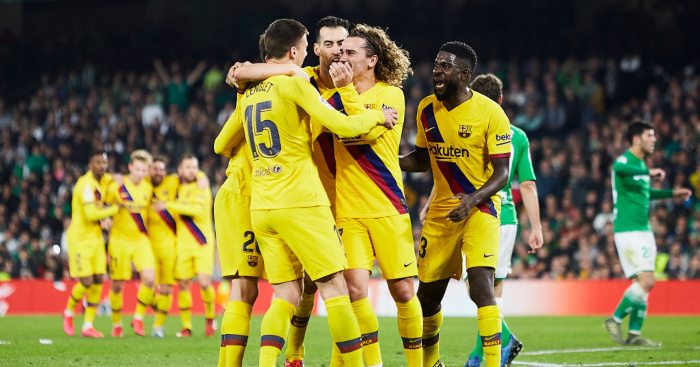 Most gameweeks in La Liga have one or two stand-out games that grab your attention for one reason or another – usually a rivalry, a six-pointer or a top-of-the-table clash. But every so often, there are weekends where several of the league’s subplots play out simultaneously, each adding their own chapter to the overall narrative of the season.

This was one of those weekends.

At the top of the table, Real Madrid bounced back from their surprise Copa del Rey exit to Real Sociedad with a 4-1 win over Osasuna at El Sadar. The game was closer than the scoreline suggests, and the Pamplona side could have got back into the game in the second half with the score at 2-1, but late goals from Lucas Vázquez and Luka Jović applied the lipstick to Madrid’s victory – their fifth La Liga win on the bounce. Each of those victories has been hard-fought, and everything about Madrid at the moment screams ‘Championship form’.

Their closest challengers Barcelona had to recover from a pretty turbulent week on and off the pitch, as Lionel Messi and Eric Abidal’s very public falling-out was followed by a Copa del Rey defeat at the hands of Athletic Club. They did just that, running out 3-2 winners in Quique Setién’s return to Real Betis thanks to a hat-trick of assists from that man Lionel Messi, but it was far from easy. The Catalan side went behind twice before Clément Lenglet capitalised on a slip from Betis keeper Joel Robles to give them the three points. It was a game that brought to mind the swashbuckling, we’ll-score-one-more-than-you days of Setién’s Betis reign, and was made all the more entertaining by some avant-garde refereeing from José María Sánchez Martínez, who sent off Lenglet and Nabil Fekir late on.

Meanwhile, the teams that vanquished the top two in the Copa went head-to-head in the Basque derby. Real Sociedad were the eventual 2-1 winners in a fascinating encounter at Anoeta, the game eventually being settled by the superb Alexander Isak, who now has eight goals in his last six games. La Real continue to hover on the fringes of the Champions League places, while Athletic are down in ninth having now gone eight games without a win.

Beyond the Basque Country, there was another fixture that has taken on a derby flavour of sorts – Getafe v Valencia. After a mass brawl following a Copa del Rey tie last season, and a race for the top four which went Valencia’s way right at the death, a rivalry between the two clubs has been born. It was a surprisingly one-sided match at the Coliseum, with Getafe dominating and rubbing their new enemies’ faces into the dirt with three unanswered second-half goals. The third-placed Azulones are absolutely flying under Pepe Bordalás, and are now in a great position to finish in the Champions League places having missed out last season.

Getafe may currently be the second-best Madrid side, but Atlético stayed in the hunt for the top four with a much-needed 1-0 win over Granada. They have been struggling of late, and Diego Simeone has come under pressure from some sections of the media, but the fans inside the Wanda Metropolitano gave their boss a huge display of support. It was a fairly typical Atlético win – an early goal and little adventure thereafter, but crucially the points are in the bag.

Down at the bottom of the table, Espanyol beat relegation rivals Real Mallorca 1-0 thanks to a goal from in-form new signing Raúl de Tomás, who has scored in all four games since his €20m move from Benfica last month. Both sides are now in the bottom three on 18 points, along with Leganés, who suffered a 2-0 defeat at Levante. Celta de Vigo, who began the weekend in the relegation places, lifted themselves out of the mire with a 2-1 win over Sevilla at Balaídos. Pione Sisto’s injury-time winner could end up being the difference between relegation and survival come the end of the season.

Elsewhere, Alavés beat Eibar 2-1 in the ‘other’ Basque derby, and Valladolid and Villarreal picked up a point each in a relatively uneventful 1-1 draw.

As we approach the crucial final third of the season, there is still so much to play for; there are no runaway leaders, no-one is adrift at the bottom and there are several candidates for the European places. What happens next is anyone’s guess, but we can be pretty confident that there will be more classic weekends of football like this one before the season is out.