La Liga is back...and it is pretty much the same as before. Only a bit quieter. 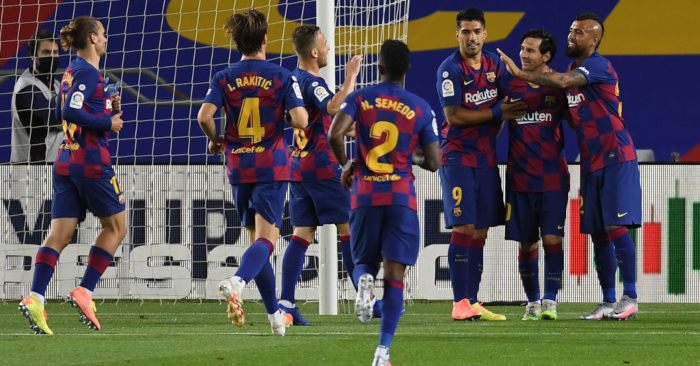 It’s been away for so long, but in many ways it feels like almost nothing has changed.

Atlético Madrid drew, Valencia dropped points due to self-sabotage and both the top two won comfortably. Pretty much business as usual, then.

Beyond a couple of mild surprises, the first weekend of La Liga action after the lengthy enforced break was reassuringly familiar, as though the football gods knew the public needed something comforting to hang on to in these crazy times.

It began on Thursday night with the Seville derby – one of the most heated rivalries in the Spanish game. The absence of fans was felt more profoundly here given that this fixture is famous for its febrile atmosphere, and while some of the magic of the occasion was lost, Sevilla put in an accomplished performance at their home ground to win 2-0 thanks to goals from Lucas Ocampos and Fernando.

Betis struggled throughout, and there is a growing feeling that while Julen Lopetegui’s meticulous organisation of his Sevilla side is starting to bear fruit, his Betis counterpart Rubi is struggling to get a tune out his fine squad of players, and may find himself looking for work again soon.

Friday night brought another derby in the form of Valencia v Levante at Mestalla, a game that Valencia needed to win to kickstart their challenge for the Champions League places. They were outplayed at times by a Levante side who are fairly comfortable in mid-table, and love nothing more than to bloody the noses of their more celebrated city rivals.

Following Levante striker Roger Martí’s sending off, Rodrigo scored late on to seemingly take the three points for Los Ché. Mouctar Diakhaby had other plans, though. Having given away two penalties in Valencia’s Champions League defeat to Atalanta in their last game before the break, he made it three in two games by inexplicably bundling Rúben Vezo over, leaving Gonzalo Melero to steal a point for the Granotes from the penalty spot in the 98th minute.

Saturday night saw league leaders Barcelona return to action against Mallorca at Son Moix. The writing was on the wall for the Balearic Islanders after Arturo Vidal’s second-minute goal, and when ex-Middlesbrough ace Martin Braithwaite popped up with his first Barcelona goal later in the first half, there was unlikely to be any road back for Mallorca.

Late goals for Jordi Alba and Leo Messi applied the lipstick to Barça’s win, and Messi’s performance was once again the difference. His goal and two assists tell only part of the story; his vision, instinct and the latent threat of what he might do made him impossible for Mallorca to deal with. His very presence creates a huge headache for opposition sides, who have to try and plan for the unplannable when Messi’s around. He may not be able to feature in every game due to the intense nature of the run-in, and Barça will have to deploy him carefully and strategically to ensure they get maximum impact and limit the risk of burning him out.

Barça’s 4-0 win put them ahead of Real Madrid, who had to beat Eibar at the Estadio Alfredo di Stéfano to keep them in touching distance of top spot. They duly responded to the pressure, and much like their eternal rivals the day before had the game sewn up in the first half thanks to goals from Toni Kroos, Sergio Ramos and Marcelo.

Eibar pulled one back through Pedro Bigas in the second half, but Madrid had well and truly eased off the gas by that point and comfortably won 3-1 to keep the sound of their footsteps in Barcelona’s ears.

Prior to Sunday’s game at San Mamés, Athletic Club and Atlético Madrid had drawn a combined 22 times this season. Now they each have one more draw to add to their collection after a predictable 1-1 stalemate featuring a lovely finish from Iker Muniain and an immediate equaliser from Diego Costa. Atleti might have had all three points were it not for a fantastic late double save by Unai Simón, but ultimately stumbled again in their quest to avoid a catastrophic failure to qualify for the Champions League.

Luckily for Atleti, results elsewhere largely went in their favour, with all of their rivals for the top four dropping points except Sevilla. Getafe lost 2-1 at Granada, who continue to exceed expectations, while pre-COVID form team Real Sociedad were held to an uneventful 1-1 draw by Osasuna at Anoeta.

In the relegation scrap, the big winners were bottom side Espanyol, who beat Alavés 2-0 thanks in no small part to the Basque side’s goalkeeper Fernando Pacheco being sent off in bizarre circumstances after catching the ball outside his area.

The Catalan side jumped ahead of Leganés, who sank to the bottom of the table after a 2-1 home defeat to Real Valladolid, who took a huge step towards safety by securing the three points. They then lost 2-0 to Barcelona, who are now five points clear at the top of the table.

Celta Vigo remain deep in the relegation soup after Villarreal’s Manu Trigueros scored in injury time at Balaídos to give El Submarino Amarillo a 1-0 win that now gives them an outside chance of challenging for the top four.

It was strange in many ways, but in other ways it felt like it had never been away. With socially-distanced subs benches, empty stands, face masks and five substitutes, it may not look like the football we’re used to, but it’s football all the same.

It’s certainly insignificant in the grand scheme of things, but football’s return in Spain seems somehow symbolic, as though the first new buds of normality are starting to push through in a country that was hit hard by the pandemic and endured one of the toughest lockdowns.

With ten rounds of fixtures to play over the next month, having endured the fast, football fans in Spain can now enjoy the feast.