Home F365 Features La Liga: 110 games and so much left to decide

La Liga is gearing up to be a treat - a title race, a relegation battle and a top-four war... 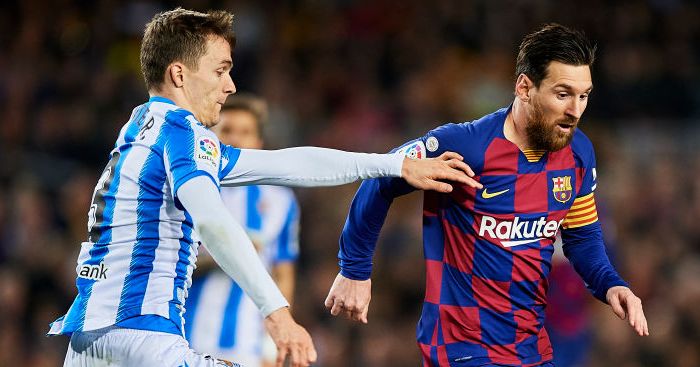 The football famine is almost over – now for an almighty football feast. When the Seville derby kicks off on Thursday night, 93 days will have passed since the last La Liga match: a 2-1 win for Real Sociedad at Eibar that in some ways feels like it took place the other day, but in other ways feels like several years ago.

There are 110 games left to play in total, which will be crammed into 38 days including 32 consecutive days of football, before two final match-days on July 15 and 19.

After the lengthy break and ahead of the sprint finish, here’s a reminder of what’s left to play for:

The title race
Neither Barcelona nor Real Madrid covered themselves in glory in the first part of the season, but thankfully for them, Atlético Madrid had an even worse time, leaving the two clásico sides to duke it out for the title.

In the penultimate game before the enforced hiatus, Madrid beat Barca 2-0 to go a point ahead of their rivals and seize control of the title race. Then, the following week, they went and lost to Betis, while Barca beat Real Sociedad to leave themselves two points clear at the top heading into the restart.

The equation for Barca is simple – win all your games, retain the title. Sounds simple enough, but Sevilla, Atlético and Athletic Club will be no pushovers. An injury scare to Leo Messi this week was a major cause for concern, but thankfully for the culé community it turned out to be nowhere near as serious as first reported. Manager Quique Setién has spoken of his worry that the change in rules to allow five substitutes will blunt Barcelona’s swords somewhat, as the ability to call on fresh legs could nullify Barca’s possession-based strategy to tire the opponent out.

Madrid probably have the slightly easier run-in, but there is always potential for them to slip up against any opponent, with trips to Real Sociedad and Athletic Club looking particularly tricky. Realistically, they will probably have to win all their games in order to win their first title in three years. Due to building work at the Bernabéu, they will be playing their home games at the Estadio Alfredo di Stéfano – the home of their B team Real Madrid Castilla. This could work to their advantage, as the players already use the pitch for training, and may feel more at ease playing at a 6,000 capacity ground rather than an echoing, cavernous Bernabéu.

It’s all set up nicely for one of the closest title showdowns in years, with potential for the lead to change hands several times over the next few weeks.

The relegation scrap
There’s potential for every team in the bottom half to be sucked into a relegation battle with only 11 games left to play. Barring any disastrous runs of form, Osasuna, Betis, Levante and Alavés have probably done just about enough already, but everyone from 15th place downwards is in a real dogfight.

It looks likely that a fairly low points total will be needed to survive, meaning that anyone in the bottom six who can muster a few wins could drag themselves to safety.

Valladolid look the most comfortable in 15th place with 29 points, but with two six-pointers against Leganés and Celta first up, followed by matches against three of the top six, they could find themselves in a spot of bother.

One place lower with two fewer points, Eibar are in a similar situation. Three of their last four games are against relegation rivals, which could see them sink or swim.

Beyond that, Celta (26 points), Mallorca (25 points), Leganés (23 points) and Espanyol (20 points) are very much in the mierda. They each have to play at least three of the current top six, and each has at least two games against a relegation rival. With no form to speak of at this stage, which three go down is anyone’s guess.

The race for the top four
There are five teams in contention for the last two Champions League places, and only five points separate them all.

Any sort of form that was shown before the break has now gone out of the window, and each of the teams involved will need to hit the ground running to stake their claim for a place at the top table next season.

Sevilla are in pole position with 47 points, and seemed to stabilise just before the intermission having added the goals of Youssef En-Nesyri in the January window. They’ll need him to pick up where he left off if they are to retain their lofty position.

Just behind on 46 points are the exciting young Real Sociedad team who were really beginning to find form before the untimely interruption. The likes of Martin Ødegaard, Mikel Oyarzabal and Portu will need to rediscover their rhythm from the outset to keep their challenge going.

Getafe are level on points with La Real, and will be desperate to make the cut after missing out to Valencia at the last minute last season. They will need to find the consistency that deserted them in the first part of the campaign if they are to qualify for the Champions League for the first time in their history.

In sixth place on 45 points are Atlético Madrid, who were pretty shambolic in the first half of the campaign, drawing more than they won and only managing 31 goals. The break may have done them some good, as they now have record signing João Félix fit again. Missing out on the Champions League for the first time in eight years is unthinkable for a club who have spent so much and of whom much is expected. They stand to lose the most by not qualifying, both financially and in terms of their hard-won status as a member of the European elite.

Then there’s Valencia, who sit three points behind on 42 points. They have an outside chance of sneaking into the Champions League, but their wildly inconsistent nature since the appointment of Albert Celades will count against them unless they can find some consistency.

Of the five, there can only be two, and whoever can cope best with the gruelling schedule and intense summer heat will surely reap the rewards next season.