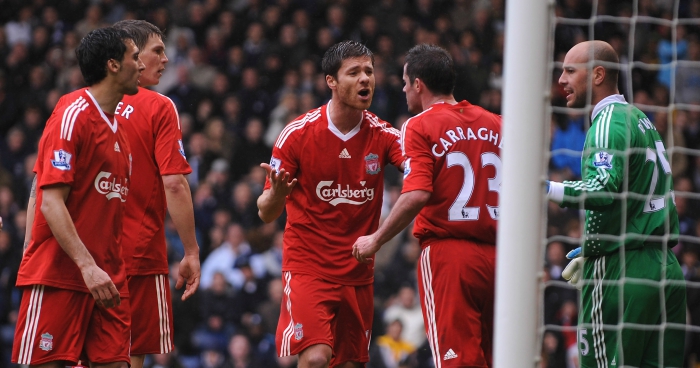 No side sets the nerves on edge in both boxes quite like Liverpool. To be a Liverpool fan is to spend part of every week taut and coiled like a cocked-and-loaded pinball plunger – apt, as watching them play is often like watching a pinball game, right down to the gaping hole at one end.

Professionalism compelled me to actually watch the win over Leicester before beginning to write about it, but I honestly needn’t have bothered. It was everything we have come to expect from Klopp’s Liverpool: fast, frenetic, full of goals, and with all the familiar faults and finery on show. You could repeat these 90 minutes on a loop 109 times and draw exactly the same conclusions about this team as you would from watching the 109 different games he has actually overseen.

Salah missing a sitter but then scoring an improbable header. Coutinho curling in a perfect free-kick. An opposition goal from a scrappy set-piece. A wonderful Liverpool break, with Henderson winning the ball inside his own third before sprinting forward to finish off the move himself. Another opposition goal from another cross, with Alberto Moreno gutlessly twisting away from Demarai Gray’s shot to allow Jamie Vardy the chance to head in the rebound. And as a coup de grace, Simon Mignolet left to deal with an incisive ball through the middle, no defenders to be seen, and ludicrously deciding to go feet-first into a tackle when diving on the ball was an option – the poor hapless bastard – only to save the subsequent penalty – the great wonderful bastard.

Klopp’s Liverpool is full of contradictions. They somehow manage to be edge-of-your-seat exhilarating and unpredictable while simultaneously offering the numb, empty feeling of inevitability. When they win, as the flip of the coin dictated here, you would scarcely have it any other way. When they don’t, it is maddening – why on earth doesn’t he change it? Like Brendan Rodgers before him, Klopp is a street pusher, selling Walter White-grade adrenaline to the red half of Merseyside who both need him and hate that they need him.

But the duality extends to their performances on the pitch, too. There are few question marks about Liverpool’s work on the ball, which is at least as good as anyone in England, bar probably Manchester City. But off the ball, they are a strange mix of the fantastic and the ridiculous: sometimes their good work can lead to goals like Henderson’s, and performances like against Arsenal.

But just as often, they concede from the simplest, most easily drillable situations – namely, crossed set-pieces and straight-line passes for runners through the defence – and you end up with goals like Leicester’s, and performances like against Manchester City.

It’s tempting to say the issue is confidence. I was recently speaking to a former Premier League goalkeeper who thought so: that when you see those coachable things going wrong, it is because the players lack belief in the group’s ability to carry out the given instructions and so stop following them.

But calling that hypothesis into question – and here is another one of those infernal contradictions – is the fact that Liverpool are largely fine against the bigger teams, or at least only as bad as those around them, which is good enough as far as picking up points is concerned.

As evidence: the only team last season to keep more clean sheets against top 10 sides than Liverpool (7) were Manchester United (8), whose manager’s entire game plan in such games relies upon it; yet the only sides to register fewer clean sheets against the bottom-half clubs than Liverpool’s 5 were Crystal Palace (3) and relegated Hull (2), who conceded nearly twice as many goals as the Reds.

Perhaps the issue is not confidence, but complacency – and for that, you look to your leaders. The pure fury that Jamie Carragher and Pepe Reina once radiated when they nearly conceded a late consolation in a 2-0 win in a nothing game is long gone, but it stands in stark contrast to the by-now familiar resigned bewilderment of Mignolet and Dejan Lovren.

“It is not a time to be completely cool,” Klopp admitted of the performance. He’s damn right: if Liverpool want to put this silliness behind them and become genuine contenders, then Klopp desperately needs to get some of that old fire and pride back into the defence.