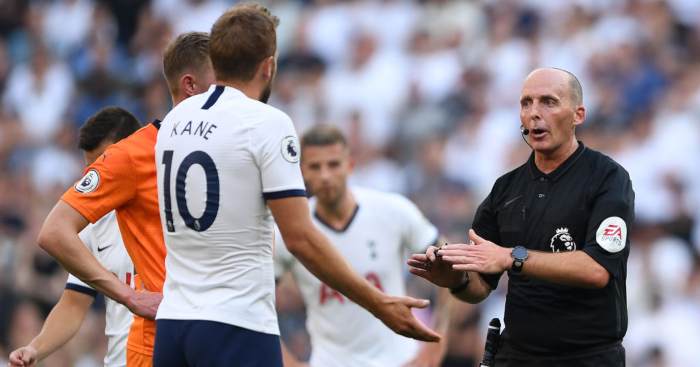 Harry Kane was left scratching his head after he was denied a penalty in Tottenham’s defeat to Newcastle on Sunday and says VAR should have changed the decision.

Kane appeared to be brought to the ground by falling Newcastle defender Jamaal Lascelles in the final 10 minutes of the 1-0 loss but referee Mike Dean waved play on.

And the decision was upheld by VAR, much to Kane’s disbelief.

“It is hard to understand how it hasn’t been given,” Kane said. “Just like when a keeper comes out, uses his arms and trips you up – it’s a penalty.

“I kind of tripped over his (Lascelles) arm and then his body. Whether it was deliberate or not, from my point of view it is hard to take.

“It is there to help the referee on the pitch. That being said he didn’t know, he couldn’t see.

“I don’t know what the conversation was – whether he said he didn’t see it or not, but from my point of view, it’s hard to understand. That’s the way football goes sometimes.

“Sometimes you are going to get the rub of the green with VAR, sometimes not. I felt it didn’t go our way against Newcastle.”

The Premier League is maintaining a high bar for VAR on intervention on penalty decisions, with a view to not re-refereeing games.

Kane, whose side have benefited from the use of VAR in recent times, is an advocate of the system, but knows it will have teething problems.

“I’ve always said offsides are definite because there is a kind of guarantee,” the England captain added.

“It is the 50-50 ones that are always going to be hard. They are never going to take away that speculation because like against Newcastle, it is always a matter of opinion.

“It’s there to help the referees, so we have to adapt to it. This is the first season of it in the Premier League. There are things that they will maybe get right and wrong. We just have to accept it and get on with it.”

Spurs could have done with the intervention of VAR against the Magpies as they were woefully below their best and lost to Joelinton’s first-half goal.

They are already five points behind leaders Liverpool and three behind Manchester City and Kane accepts it is going to take something special for Spurs to challenge for the title.

“It is still going to take a lot of hard work,” he added.

“As you’re seeing from Manchester City and Liverpool there is no letting up from them.

“I said before the start of the season that if we could put a run together, get that momentum, maybe winning for two to three months on the spin without dropping any points, then that’s what it’s going to take.

“I knew we had to keep up with them, make sure we win, especially at home.

“It is disappointing that we haven’t done that in only our second home game.

“But there is still a long way to go, there are a lot of big games ahead of us. It just means we are going to have to pick up points in the big games, the tough games and try to improve on what we did against Newcastle.

“It’s a disappointing start but there is a long way to go.”