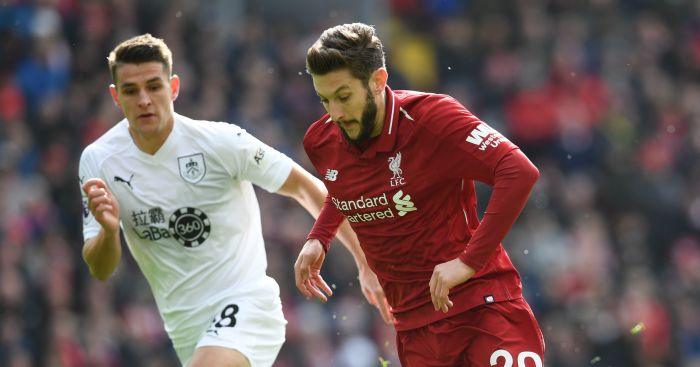 Adam Lallana thought Liverpool “showed great character” as they came from a goal down to beat Burnley 4-2 in the midfielder’s first start since facing West Ham five weeks ago.

The gap to Premier League leaders Manchester City was reduced back to one point as Jurgen Klopp’s side overcame Ashley Westwood’s controversial first goal for the club.

Key to the win was Lallana, not the most popular choice among fans to replace Jordan Henderson in midfield, who on only his fifth start of the season had a hand in the first two goals for Roberto Firmino and Sadio Mane.

Firmino and Mane also scored in the second half, with Mane’s the last kick of the game seconds after substitute Johan Berg Gudmundsson had scored an added-time goal for the Clarets.

“Burnley made it very difficult for us and got an early goal.” Lallana told BT Sports. “I’m not sure if it was a foul on the keeper, I’ve not seen it back yet.

“All we have to do is concentrate on ourselves and win games. Obviously, City won yesterday so it was our job today to put in a professional performance and Burnley didn’t make it easy.

“We might not have made it easy for ourselves there at the end but Sadio (Mane) just finished it off.

“I thought we showed great character after going one down, it’s never easy and sometimes the fans get apprehensive.

“It was blowing a big wind out there as well, the conditions were tough but that was fair for both teams so there are no excuses but we thoroughly deserved the win in the end.”