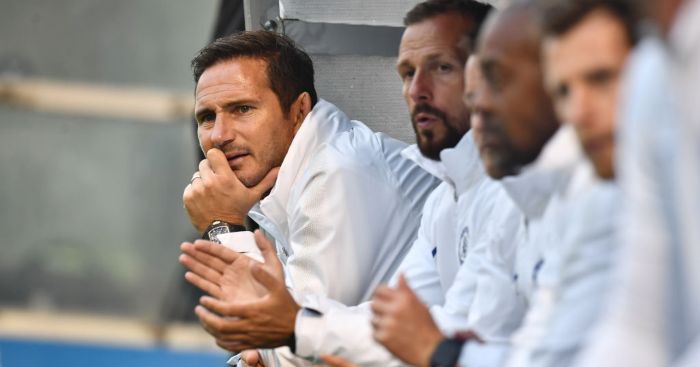 To be Frank
Chelsea played a pre-season friendly on Wednesday. The Sun afforded it 13 short paragraphs befitting ‘a low-key start to a new era’.

As Charlie Wyett writes: ‘Chelsea fans paid £10.99 to watch online but complained the website kept crashing. They did not miss much.’

Those last five words, from a journalist at a usually hyperbolic and reactionary newspaper, are instructive.

Matt Barlow of the Daily Mail is fortunate enough to be on tour with the club in Dublin, but even he gave it just ten paragraphs in the newspaper, much of which comprised of Frank Lampard quotes. In his MailOnline copy, he refers to the game as ‘little more than a training exercise’.

Darren Lewis of the Daily Mirror echoes that message, writing 112 words for the newspaper and imploring everyone to ‘not read anything more into it’ in one of his five learned lessons for the website.

But Matt Law did not receive this memo, for Matt Law simultaneously adores Frank Lampard and admonishes Maurizio Sarri at any given opportunity.

So this was not a mere ‘training exercise’ for the Daily Telegraph. No, this was an ‘”I was there” moment’ for the travelling supporters.

‘Make no mistake, in the eyes of the fans, this is Lampard’s Chelsea,’ he writes. ‘Big name players and even owner Roman Abramovich are now part of the supporting cast rather than the main act.’

Not even Lampard himself would agree with that. Since when can a member of ‘the supporting cast’ sack ‘the main act’ if things go wrong?

‘There was no expensive suit or over-the-top reaction to the chants from the stands. Lampard, dressed in a tracksuit, was in Ireland to start work.’

Yet Maurizio Sarri ‘looks like he got dressed in the Stamford Bridge club shop’ when he did the same, right? The fact that he ‘has not been seen in a suit since his unveiling as head coach’ was inexplicably worthy of comment two months ago. Why was he constantly criticised for it, yet Lampard is here ‘to start work’ when he does the exact same thing?

As pretty much everyone suspected, Lampard might have the easiest first year in a job ever. All hail the man who played Michy Batshuayi, Danny Drinkwater and Kenedy in a pre-season friendly. No longer will they be ‘deemed unwanted’ (until the season starts and they’re all sent out on loan or training with the Under-23s).

‘Lampard had insisted that he would offer all of his players clean slates and he remained good to his word, with teenager Ethan Ampadu, barely used by Sarri, partnering Drinkwater in a holding midfield two.’

Ampadu started the season aged 17, started in the Europa League and made the bench for the final, was in four Premier League matchday squads and played twice in the FA Cup. He was ‘barely used’ – playing more than half the minutes of Gary Cahill – because he’s still a sodding kid; let’s wait until the season actually starts to see how often Lampard uses him.

‘Drinkwater showed plenty of endeavour and picked out a couple of smart passes, but just 30 minutes of football in the Community Shield under Sarri also told during his 45 minutes of action.’

Are we really blaming Sarri for overlooking the brilliance of Danny Drinkwater?

‘All of the Chelsea staff, including administrative personnel, wore the same club tracksuits, underlining the new feeling of unity brought about by Lampard’s return and the appointment of a backroom staff full of Blues history.’

It reads like an English Literature A-Level student looking for meaning that isn’t there. He was hardly going to turn up in a shirt and tie for bloody Bohemians.

‘Substitute Molloy denied Lampard a first victory in charge of Chelsea, but it did not really matter to the travelling fans who had their “I was there” moment.’

It wasn’t the f***ing Pope coming to visit. It was Frank Lampard managing a load of Chelsea loanees and youngsters to a draw against Bohemians in an utterly meaningless friendly. Get your head out of his a*se.

If only Chelsea hadn’t started their pre-season with an actual victory over Perth Glory last summer. Law was so impressed by that that he didn’t even bother writing the Telegraph’s report at the time. He was presumably too busy trying to work out whether wearing a club tracksuit was a good or bad thing.

“…3,800-capacity venue, which is due to be knocked down and replaced by a shopping centre”

Roll the ‘Dyce
Credit to talkSPORT for getting Sam Allardyce in as a guest on Thursday. It is always a breath of fresh air when the station gets some new voices to offer incisive analysis and new information.

Oh, what’s this? He’s talking about “the job I did for” Everton again? That’s a real shame.

“Before I would come to try and save a side, but what happened before at Everton really disappointed me so badly,” he says.

“That was a great honour for me to manage Everton and I was bitterly disappointed about what happened after the job I did for them.”

You were “bitterly disappointed” to lose your job 12 months early after finishing behind Crystal Palace in a Premier League form table since your appointment? Weird.

“That was not supposed to be a saving job, this was supposed to be taking the club forward, creating a team to break into the top four and I never got that chance and it still rankles me because I couldn’t have done any better.”

An 18-month contract screams “saving job”. And you could have got a positive goal difference, won more than two games in a row, reached the FA Cup fourth round or spent £47m more wisely than on Cenk Tosun and Theo Walcott.

“They moaned about that football, but that wasn’t my team – I inherited that side and I made it better to finish eighth. Where did they finish last year, after spending another £100m? Eighth!”

Southampton wasn’t Ralph Hasenhuttl’s team but he made them considerably better and earned the opportunity to develop them further. That’s how this sh*t works.

And Everton certainly did finish 8th last year – although it was after spending £80.1m (and earning about £20m from player sales) instead of £100m. That’s less than twice the amount you spaffed the previous January.

But you were definitely hard done by, Sam. Who knew you could lose your job, receiving a handsome compensation sum in the process, when someone more suitable becomes available?

Paul the other one
After the Manchester United SHAMBLES that was ably uncovered by Neil Custis on Wednesday, the same man was there to witness Ole Gunnar Solskjaer going ‘into full defence mode’ at a recent press conference.

The Norwegian ‘has clearly learned from the Master when it comes to handling tricky situations off the pitch,’ apparently. Why do the national press capitalise Random words so often?

Among the issues Solskjaer covered was the absolute non-issue of the week: Paul Pogba and Jesse Lingard not arguing.

‘Solskjaer also downplayed a video that was put out on United’s social media accounts which showed Pogba and Jesse Lingard arguing and being separated by Victor Lindelof.’

Neil, there is literal proof that this is b*llocks. United put out an extended version of the video that showed it to be nothing more than two teammates having a laugh. Why, days after this became apparent, do you keep flogging this most deceased of horses?

G’day, Bruce
‘Steve Bruce held talks with Newcastle managing director Lee Charnley last night as he closed in on his dream job,’ reads the first paragraph to a David Coverdale exclusive on the back page of The Sun.

‘He was then due to meet Charnley, who has identified him as the man he wants to replace Rafa Benitez.

‘Newcastle are prepared to pay £1million in compensation to get the former Sunderland manager out of his one-year rolling deal at Hillsborough.’

Sheff Wed. Some shock at suggestion that Steve Bruce compo is 1m. It is much much more. Newcastle won’t be able to do this cheap …

What’s £4million between friends?
On that note…

‘Steve Bruce will cost Newcastle a £1million transfer fee – and they want him in the hot seat before the weekend’ – Simon Bird, Daily Mirror.

‘Bruce is understood to be at the top of Newcastle’s shortlist, with formal contact expected to be imminent ahead of their Premier League Asia Trophy trip to China on Saturday. It is believed compensation of £1million would have to be paid to secure the services of the former Manchester United captain’ – Matt Lawton, Daily Mail.

‘Bruce is now Newcastle’s choice to succeed Rafa Benítez. The 58-year-old returned to management in February when he took over at Wednesday and it is understood that a compensation clause of more than £5 million was included in his contract’ – Paul Joyce and Oliver Kay, The Times.

Recommended reading of the day
Jonathan Wilson on Nigeria.