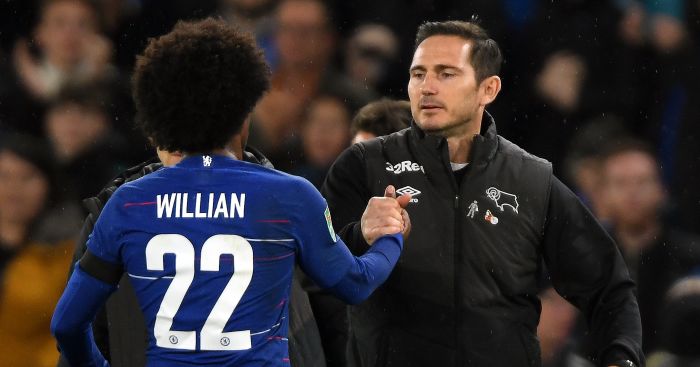 Frank Lampard had a night of mixed emotions as his Derby side were eliminated from the Carabao Cup by former club Chelsea.

Lampard was serenaded throughout after being denied a Stamford Bridge farewell more than four years ago as two own goals proved costly for Championship Derby in a 3-2 loss.

Chelsea’s record goalscorer was frustrated Cesc Fabregas’ decisive strike after 41 minutes was allowed to stand. The Rams felt there was a foul by Davide Zappacosta on Tom Lawrence in the build-up.

“The third goal was a foul. The whole stadium saw that,” Lampard said.

“I turned round thinking we’d got the foul, then looked back and they were in our box.

“VAR should clear up the ones that go slightly wrong. It didn’t.”

Lampard scored a club record 211 goals in 648 appearances and 13 years at Chelsea, but left when his contract expired in June 2014, without having the chance to say goodbye.

Lampard admitted an afternoon nap – a routine retained from his playing days – had proven difficult on a surreal day.

He added: “It was exciting for me. Nervous and excited. It is home. Not my current home, but my home for such a long time.

“My overriding feeling is thanks to the Chelsea fans and the Derby fans and pride at the team.”

Lampard refused to dwell on his departure.

He added: “I left quietly. That was the circumstances at the time. I’ve got no bad feelings and I’ve got great relationships.

“It was nice to come back and feel it so positive.”

Tomori and Richard Keogh scored own goals, with Derby’s equalisers coming from Jack Marriott and Martyn Waghorn, whose effort was set up by Mount.

Fabregas struck and Derby had chances to level again, leaving Chelsea assistant boss Gianfranco Zola to admit there was plenty of room for improvement.

“It was more than a little bit (shaky), especially towards the end,” Zola said.

Chelsea are still unbeaten in competitive games this season and next face Bournemouth.

Arsenal and Tottenham were drawn to face each other in the quarter-finals.

Arsenal beat Blackpool 2-1 and Spurs won 3-1 at West Ham in a contest marred by trouble at the London Stadium.

Reigning champions Manchester City play Fulham on Thursday and the winner will face either Leicester or Southampton.

That game was due to be played on Tuesday, but was postponed following the death of Foxes owner Vichai Srivaddhanaprabha on Saturday.

The last-eight ties take place in the week commencing December 17.