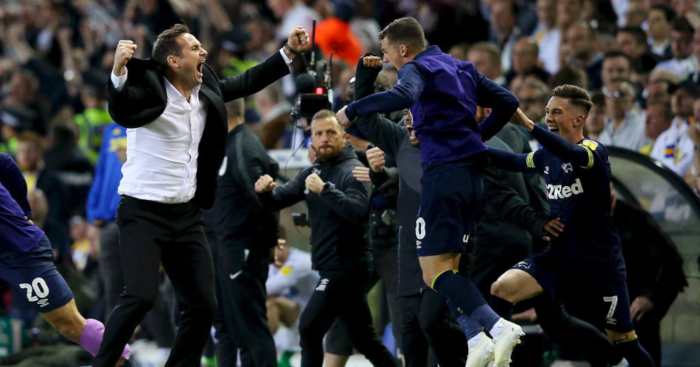 Marriott hauled his side level at 1-1 on the night 33 seconds after stepping off the substitutes’ bench shortly before half-time.

Derby then stunned Leeds at a partisan Elland Road with further goals in the second half through Mason Mount and Harry Wilson’s penalty.

Leeds responded through Stuart Dallas’s second of the night, which made it 3-3 on aggregate, but Marriott’s late winner sealed Derby’s place at Wembley in the final.

“The Jack Marriott one is a question I get asked. I know the fans want to see him playing,” said Lampard.

“Jack’s been really good for us this season. I just felt in the last couple of months, in terms of what I really want from Jack, what can make him the player he was tonight, is the absolute ethic to do everything as an all-round striker.

“He’s not the tallest. He’s strong in terms of stockiness, but he needs to work without the ball, to have a hunger and desire constantly.

“I said to him before the game I had a feeling. I said I know you’re upset, but I have a feeling that something’s going to come from you today.”

Lampard said his emotions after his side’s victory matched anything he had felt during his playing days.

“In terms of personal achievement, the feeling is as much as I’ve had in football.

“It’s not the personal achievement of being able to win stuff at Chelsea, but in terms of how I feel right now, it’s up there.”

Leeds, who missed out on automatic promotion after topping the table in March, will now do all they can to keep hold of manager Marcelo Bielsa.

Bielsa could not hide his disappointment, but said he would listen to the club’s proposals for next season.

“It’s not as you can imagine convenient to talk about this point right now,” the Argentinian said.

“Anyway, the process and you know about this process, that’s why I’m talking about it, if the club offers me the possibility to carry on I will listen to this proposal.”

Leeds spurned chances to take a commanding aggregate lead in the first half and failed to convert their openings in the second period – a season-long theme that has caught up with them.

“It’s a painful situation and we’re all disappointed,” Bielsa said.

“In the first half we should have finished with one or two goals more and in the second half it was a game that broke immediately.

“The chances of the opponent ended in goals and our’s not.”

But Bielsa had no complaints about his players, adding: “What they have offered to the club during this season will be valued with the time.

“The fact that we couldn’t reach goals that were so close leaves a feeling of disappointment, but you can have another perspective about it.”