Home All The News Lampard delighted with ‘amazing’ four-goal Giroud 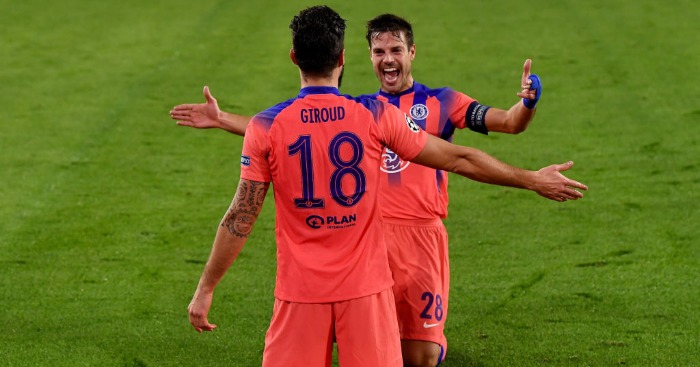 Giroud followed on from his game-winning performance last week on Wednesday vs Sevilla. He opened the scoring early on as he was set up Kai Havertz.

The Frenchman calmly slotted it into the bottom corner to put the Blues in control early on. The score remained 1-0 – a score that would have delivered decent odds if you had used an odds comparison site – until early in the second half.

F365 Says: Solskjaer and Man United are trapped in a vicious circle

Giroud doubled Chelsea’s advance with a sublime chip over Alfonso Pastor in the 54th minute. The forward completed his hat-trick 20 minutes later.

N’Golo Kante advanced down the right-hand side and he delivered a lofted ball towards Giroud, who headed home to round off his perfect hat-trick.

A superb night for the striker was made even better late on as he won a penalty after being pulled down by Sergi Gomez. Giroud took it himself and he placed it into the top corner to make it 4-0.

With this victory, Chelsea secure their place in the knockout stages of the Champions League in style. They are three points clear at the top of Group E with four wins and a draw so far.

Lampard spoke with BT Sport after the game – as cited by BBC Sport – and he was quick to praise Giroud after an astonishing solo performance against Sevilla.

“Four goals at this level and the quality of the goals, individual aspects from Olivier [Giroud] and team aspects in the first half, from back to front the team were great, an amazing solo performance from Olivier.

“I’m delighted with him, delighted with the team. This is a difficult place to come. There were moments in the first half where it was tough and we dealt with it.

“Olivier is reliable, full stop. Not just for us but his international goals for France, he’s up there with great French individuals, he’s got great statistics.

“I’m not too bothered about that in a way. But I am bothered about what he gives us on the pitch. There couldn’t be a team-mate there that the players are happier for because of the way Olivier is around the training pitch and in the games.”

Lampard added: “We’ll have to see [if Giroud will play vs Leeds] – it’s a tight turnaround but it’s four goals in a game. It’s not just his performance but when you play him and utilise his strengths and his speed, there’s a real balance in the rest of the team.”