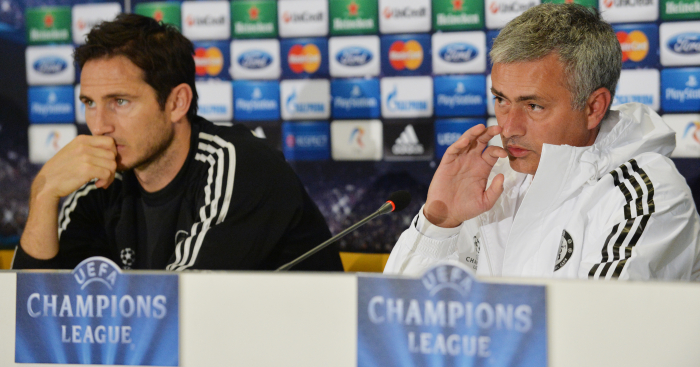 Frank Lampard is looking forward to pitting his wits against former mentor Jose Mourinho when their clubs meet in the Carabao Cup at Old Trafford on Tuesday.

Lampard, who is finding his feet in his first job in management, watched his Derby side climb into the top six of the Sky Bet Championship with a stylish 3-1 home win against Brentford on Saturday.

Mourinho’s Manchester United on the other hand are in a state of flux, with the 1-1 draw against Wolves at the weekend leaving them seventh in the Premier League table and the manager as a Premier League loser.

Mourinho managed Lampard during his two spells in charge of Chelsea and left a lasting effect on the former England midfielder, and even gave him a congratulatory call following the recent birth of his third daughter.

The Derby boss said: “I’m looking forward to seeing him. On a personal level, (he is) a manager that was hugely influential on my career twice, but particularly the first time around. I respect him completely for that.

“It will be nice to see him and go up against one of his teams.”

He added: “You will find Jose Mourinho players being managers all over the place because he has been so successful in his career.”

Lampard expects his Derby side to face a tough test regardless of United’s relative struggles this season, adding: “It’s a very tough challenge.

“We know what we’re coming up against – a great Manchester United team who have been out together with quality everywhere you look.

“The fact we are on telly against one of the top teams in the Premier League is a great challenge for us.

“They’re expected to win, quite rightly so with the squad they’ve amassed there.

“It’s a challenge for us and we want to go there and do as well as we can.”

Despite the threats posed by the Premier League outfit, Lampard believes his players can perform well at Old Trafford.

He said: “If we put in the energy and the focus that we have (against Brentford) then will make a good account of ourselves.

“What we can’t do is go there and walk away at the end of the game and say ‘oh, we should have done that, we should have shown more against this team or on this occasion’. We have to give everything.

“You have to approach a game so that it won’t pass you by.

“I want us to give an account that all those travelling fans, and I know there will be a lot of them, come away proud of their team.”

Derby will be without Curtis Davies (hamstring) and George Evans (knee) while Tom Lawrence servers the final game of his there match suspension.