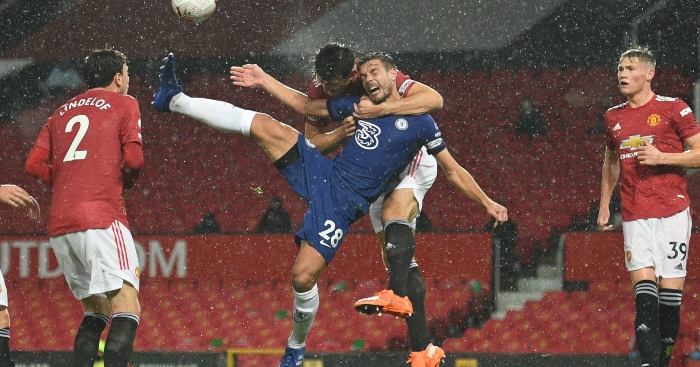 Chelsea manager Frank Lampard could not believe that video assistant referee Stuart Attwell ignored what he felt was a “clear penalty” in the goalless draw at Manchester United.

The top-four rivals went toe-to-toe in driving rain at an empty Old Trafford, where Blues goalkeeper Edouard Mendy capped a fine performance with a superb late save to prevent Marcus Rashford snatching a second last-gasp victory of the week.

United had edged the 0-0 draw but Lampard felt his side should have been awarded a first-half penalty after Harry Maguire grabbed Cesar Azpilicueta in the box.

The Chelsea captain felt it should have been a penalty and questioned the lack of VAR intervention, telling Sky Sports: “On the pitch, yes I felt it was. I felt his arms around my neck and shoulder.

“The referee can make the decision and VAR is there. It is difficult but I would encourage the referee to go and look at the monitor. It is there to help so why not take 20 seconds to go and review it?

“Contact happens in football and I don’t say all contact is a penalty. No, far from that. But we all need to work together to make the game better.”

Lampard echoed Azpilicueta’s view on the incident, having been left bemused at the lack of help from the VAR.

“I thought it was a clear penalty,” the Chelsea boss said. “Clear penalty.

“Obviously I didn’t see at the time from where I’m standing. They are hard calls for referees on the pitch, but the VAR was very quick to dismiss it in my opinion.

“I think they should have taken time, advised the referee to watch the monitor.

“I think if he watches the monitor, he has to give the penalty if he sees it back again, so it’s very confusing.”

Lampard said, “it wasn’t a difficult one for the VAR to give” on an evening when summer signing Mendy produced some fine saves after nearly passing into his own goal.

“The performance was very good,” the Chelsea manager said. “You rely on goalkeepers in those moments if it’s a tight game.

“There wasn’t many chances and great quality at the end and he showed what he’s there for.

“We brought him in because of his quality. He’s showed great composure in the games he’s played already and I’m delighted with the saves he’s made today.”