"The challenge now is to see what more we can do next season." 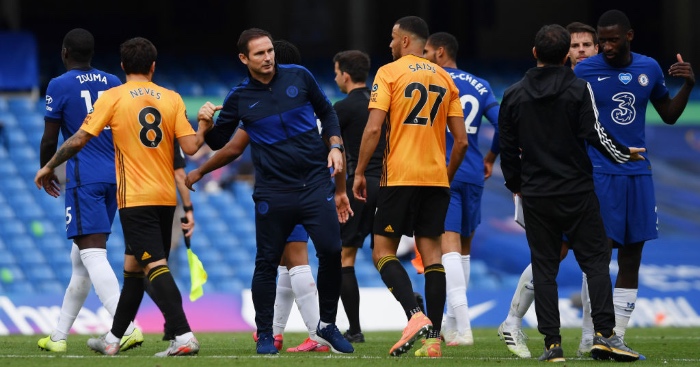 Frank Lampard hailed the “discipline” of his Chelsea side after they cruised to a 2-0 win over Wolves to confirm Champions League qualification for next season.

Mason Mount scored a wonderful free-kick and then set up Olivier Giroud in first half stoppage time, and it was the attacking duo Lampard was particularly impressed by.

He said: “They’re a really good side to play against, but the discipline of my team today was fantastic. Sometimes we haven’t had that at home this season.

“Mason [Mount]’s strike was pure quality, Giroud was class as always. It means a great deal to me, at Chelsea we can’t get too excited with Top Four finishes. When we first came in we maybe weren’t considered there but what we’ve done this season is take the opportunity to bring in the younger players and improve the existing players.

“There were a lot of unknowns when I came in, could we move forward without Eden Hazard. We knew we had lost a massive player. We’ve a real spirit within the group now and it’s a real team effort now.

“Myself and the staff want to improve every time, the challenge now is to see what more we can do next season.”