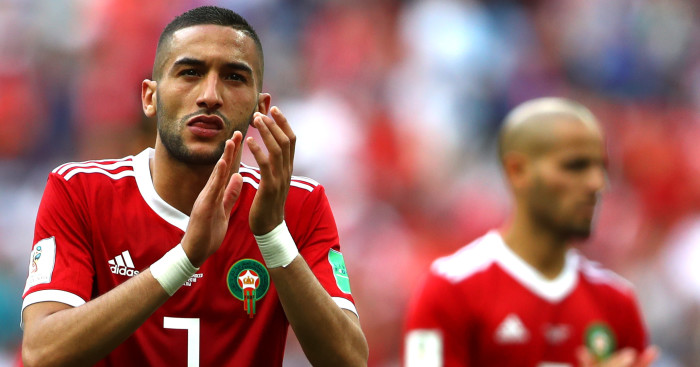 Chelsea boss Frank Lampard is excited by the prospect of having Hakim Ziyech to call on next season.

The Morocco international will join the Blues from Ajax in the summer for £33million which could rise to £37million.

As a result, Ziyech will become the first significant signing of Lampard’s reign as head coach, and the club legend is delighted by the quality the playmaker will bring to Stamford Bridge.

“I know his qualities,” he told Chelseafc.com. “He’s a player we hope can bring creativity.

“He first came to my attention watching him play in Ajax’s Champions League run last year and I thought he was one of their standout players, particularly in the games against Tottenham.

“This season, we’ve come up against him twice so I know a lot about him. He has a great left foot, plays generally off the right-hand side but can play in behind the frontman as well.

“When you look at us this season, there have been games where we’ve maybe struggled to unlock the door and he’s certainly a player who we hope can bring that bit of creativity.

“He will be something different for us so we’re excited. I know he’s not coming in now but I think it’s exciting for us as a club and for the fans to know that he’ll be here next year.”

Ziyech has mainly played from the right this season and it was from that position where he put on a creative masterclass against Chelsea in the Champions League.

He provided three assists in a memorable 4-4 draw at Stamford Bridge, but can also play just behind the striker, a role Mason Mount has been used in on occasions this season.