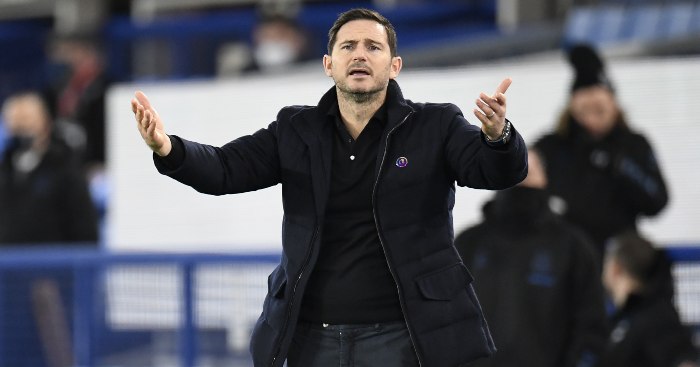 Chelsea manager Frank Lampard insists his team remains a work in progress after their 17-match unbeaten run was ended at Goodison Park.

Everton’s 1-0 win, courtesy of a Gylfi Sigurdsson penalty, was the third successive loss Chelsea had suffered on the ground and was a reality check for Lampard’s side, who would have gone top of the Premier League with a victory.

The visitors headed into the weekend with only defending champions Liverpool having scored more times.

EVERYBODY LOVES: Son is brilliant *and* won’t ever be caught at a sex party

But shorn of three wingers in Christian Pulisic, Hakim Ziyech and Callum Hudson-Odoi, Lampard saw new signings Timo Werner and Kai Havertz struggle against a resilient Toffees defence which was made up of four centre-backs because of injuries.

Lampard rejected Jurgen Klopp’s suggestion last week that Chelsea have the best squad, and stressed there was some bedding-in still to be done with £200million-worth of new talent.

“I keep reading how we have the strongest squad in the league,” he said.

“I don’t understand as the squads around us have won titles in the last three or four years and have players littered through their squad who are wingers scoring 30 goals a year, people who have won the league and Champions League.

“We are in the position of being a work in progress and nights like this will happen.

“The important thing is that we bounce back strongly. Let’s see for Tuesday (at Wolves).”

Lampard does not know whether Pulisic will be fit in time as he was expected to feature against Everton after a hamstring problem.

However, after seeing him in training on Friday he knew there was no chance of the United States international being in a position to play.

“It wasn’t hard, he had to be left out as he was uncomfortable in training and he could not start a game and play 90 minutes in the Premier League,” Lampard said.

“We did miss our three wingers who were injured. It comes back to the same story: there are muscle injuries all over the Premier League.

“(James) Rodriguez was out for them. When you watch Everton against Chelsea you want to see these sorts of players, exciting wingers. If you don’t, you don’t see the best of the Premier League.

“It comes back to something which I think will be addressed again with the five subs later in the week.

“In terms of player welfare, we are asking players to fly all over the world for their country and play three games in 10 days, and then go again on a Saturday and a Tuesday. Players that are explosive at the top end of the pitch are getting issues.”

Victory was timely for Everton – as was a first league clean sheet since the opening day of the season – after just one win in their previous seven matches.

But manager Carlo Ancelotti, who got the better of his former Chelsea player, knows they have to start stringing together wins again.

“We have to see if this result will help in the future,” said the Italian.

“We started the season really well but after that we lost a little bit of our confidence and attitude.

“We have a really tough game on Wednesday (at Leicester), when I hope to see the same attitude and spirit.

“We won because of our spirit, not the quality of our play.”