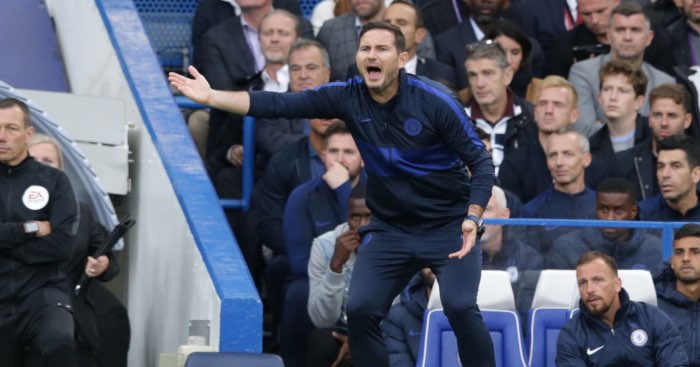 Chelsea boss Frank Lampard says a big part of his job this season is the work he does off the pitch but insists he is not always ‘so nicey nicey’.

The role of mentor is particularly important for Lampard at Chelsea this season with many young players forcing their way into the first team.

Many of Chelsea’s youth products performed admirably in their 7-1 EFL Cup win over Grimsby and Lampard believes the club are showing their commitment to promoting from within.

He said: “I think the fact we are seeing a great number of them on the pitch speaks for it. As a group yes, there is a lot of work ahead of them. The step into the first team is the easier one, now it’s about staying in it.

“They all seemed very comfortable. It was a different game to a Premier League game, but they are confident lads. They have every grounding and base needed.

“I know Arsenal for a long time have played young players in some competitions. I only want to speak to ourselves, you can’t walk away from a transfer ban.

“There is competition in there, Tomori is now number one or two as it stands. They are really playing well. Age isn’t a huge story.”

“A huge part of any manager’s part is to not just work on the pitch, but to pass on more knowledge and be there.

“I try to do that. I want them to feel that they’re there. Sometimes I might not be so nicey nicey.”

Chelsea host Brighton at Stamford Bridge on Saturday, where the Blues are yet to pick up a win so far this season.

“The fact we haven’t won at home is something we want to correct. We need a similar performance to Liverpool.

“If we get that level then I expect we can do okay. We have had a run of home games, but we have to respect Brighton.

Lampard confirmed that both Callum Hudson-Odoi and Reece James will be on the bench for Chelsea after featuring the EFL Cup midweek.