Home All The News Lampard: It was a ‘special performance’ against the Special One 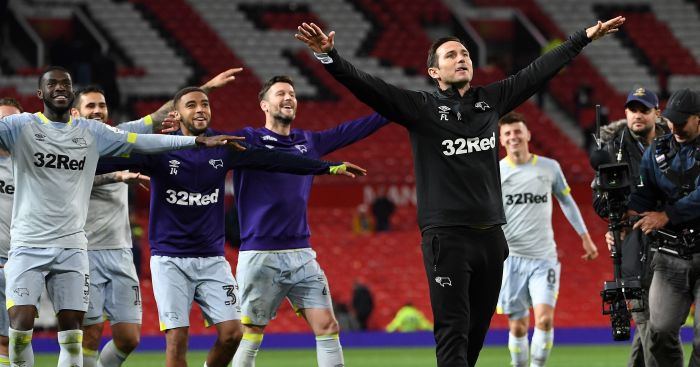 Frank Lampard hailed Derby’s “special performance” against ‘the Special One’ after knocking his former manager Jose Mourinho and his Manchester United side out of the Carabao Cup.

Just days after a meek home draw against Wolves, things got worse for United as their much-changed side deservedly bowed out to Sky Bet Championship opposition at Old Trafford.

United paid for their failure to build on Juan Mata’s early opener, with Harry Wilson scoring an exceptional free-kick and substitute Jack Marriott directing home either side of Sergio Romero’s sending-off for handling outside the box.

Marouane Fellaini’s stoppage-time goal secured a 2-2 draw that took the third-round tie to penalties, where Derby goalkeeper Scott Carson denied Phil Jones to settle a high-quality shoot-out 8-7 and give Lampard the most memorable win of his short managerial career.

“I think I need time (to digest it),” the Rams boss said.

“It was special – a special performance. To come to Manchester United and not to just nick one, but I think to play the way we played, doing all the things we have been working towards in a short space of time.

“To do it on this stage against this team full of top players with our squad which has some younger boys in it as well – the players were immense. What a night for the club to come here and do that.”

Lampard was delighted that his group had “the confidence and the balls to play like that” before forgetting their penalty practice to net eight straight spot-kicks.

“We practiced them yesterday, so I certainly wasn’t sure because a few ended up in the bushes at the back of the training ground!” the ex-England international said with a smile.

But few would argue that Derby did not deserve to progress on Tuesday, including Lampard’s former Chelsea manager.

“He said what a great performance it was from the team,” the County boss said of Mourinho. “I appreciate that because it’s not easy in defeat in that last moment.

“I think he actually said that before the penalties, but I appreciate it.

“Jose was very welcoming as a whole. We obviously know each other, and he came and spoke to me before, we spoke during and afterwards. It was an honour for me to go up against him.”