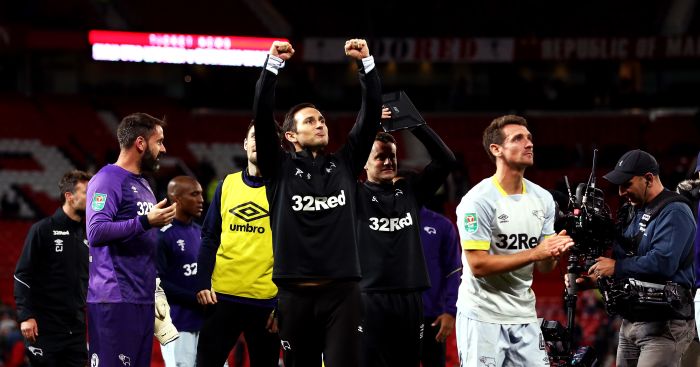 Derby boss Frank Lampard admits the Rams’ Carabao Cup tie at his old club Chelsea will be a “very special” occasion for him.

Lampard played for the Blues from 2001 to 2014, scoring a club-record 211 goals and winning 11 major trophies, including the Champions League in 2012 and three Premier League titles.

The 40-year-old said at his press conference ahead of Wednesday’s fourth-round clash at Stamford Bridge, which he visits for the first time as a manager: “It’s a special draw for me to be able to go back and see people behind the scenes and 40,000-plus friends in the stadium.

“I’m more emotional as I have gotten older, I think. These things catch you. Because you realise, in my life, how important Chelsea was and what I owe for that in terms of thanks.

“I’ll feel proud and honoured to be taking my team and going to a place that I called home for 13 years and still feels like home.

“This (Derby) is my working home now and I have a great affiliation with this club already. I’m working hard to try to do something good here, and I love it here.

“But I can’t forget 13 years of my career. It was a very special time for me, I was lucky to be part of such a strong era at the club. So it will be a very special night for me to be back there and feel that atmosphere once again.”

Derby head into the contest having made it through the previous round with a shock triumph against Manchester United and Lampard’s former Chelsea boss Jose Mourinho, winning on penalties at Old Trafford.

While Chelsea have granted the Championship outfit permission to play their loanees Mason Mount and Fikayo Tomori against them on Wednesday, their star man Eden Hazard (back) is expected to miss out.

Hazard is the joint-leading scorer in the Premier League this term with seven goals, and when Lampard was asked if his former team-mate was the best player in the world right now, he said: “On current form, and his Premier League form, yes.

“I’ve known it since the day he arrived at Chelsea (in 2012) – I could see the potential, the natural ability, and he has matured as a man and a player and I love watching him.”

It will also be a big night in London for League One Blackpool, who travel to Arsenal, while West Ham face Tottenham at the London Stadium and Middlesbrough host Crystal Palace.

Ahead of their trip to the Emirates, Seasiders boss Terry McPhillips said: “It’s a really mouth-watering game. The lads are buzzing.

“It’s a massive club, great stadium, good manager, great players. We go and have a go, and we’ve got nothing to lose really.

“In the last round against QPR (a 2-0 win) I thought we were different class. Hopefully if we can play like we have been playing in this tournament, then we’ll have a chance.”