Home Mailbox Lampard is not Gerrard’s ‘peer’, Southgate learning nothing and… 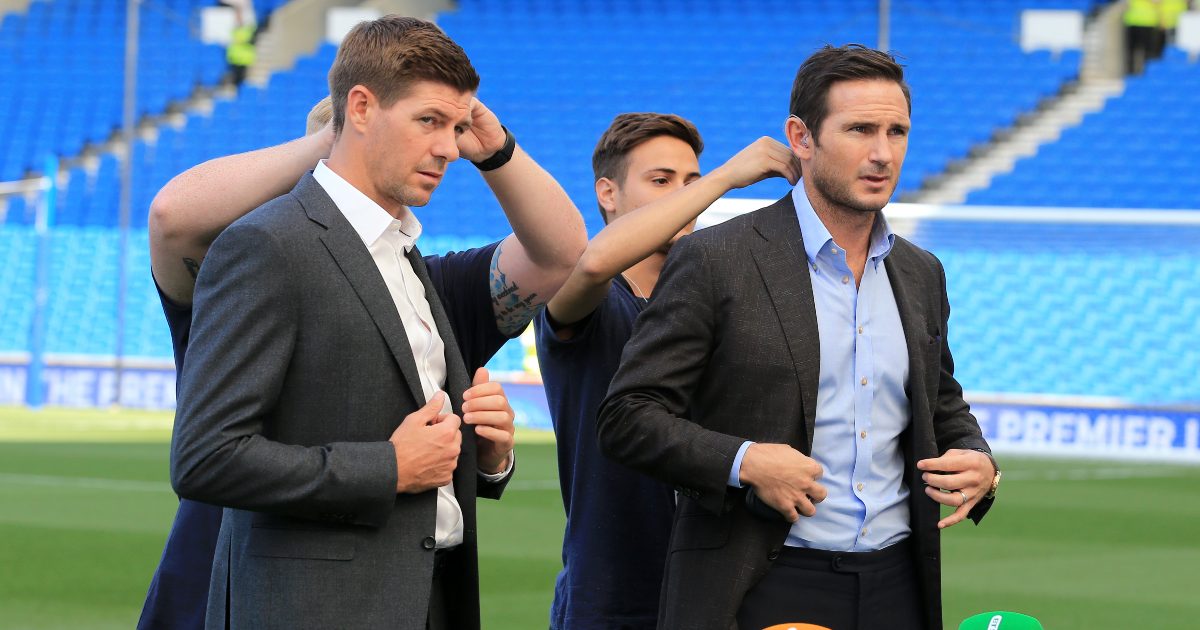 Please do keep your mails coming to theeditor@football365.com.

Simon Jordan on Lampard
I’ve seen alot of respect lately for former Palace chairman Simon Jordan’s views on football matters, I don’t really follow it too much, I’m not taken in by incendiary scathing analysis on football related things so much, but he sounds like a moron to me considering his comments about why Lampard would be a greater fit to replace Gerrard at Rangers than Giovanni Van Bronckhorst.

Guy is stuck in 2005 referring to Gerrard as Lampards “peer”, saying it isn’t ideal to follow a peer into a job. It’s 2021,they are long removed from being peers, except in the managers association stance of things. He is no more a peer than Gio Van Bronckhorst. It’s a crazy argument, one guy can’t succeed another guy because they played together once, or because they are in the same profession? It sounds stupid.

This is just his “there is a flaw, but…” point however. This is a glowing appraisal for Lampard to get the job despite this flaw. Even though it isn’t a flaw. It sounds like he’s trying to get Lamps a job, making up a flaw that doesn’t exist and then continuing “IN SPITE OF THIS, HE IS OVERWHELMINGLY POSITIVE” kind of vibe.

It stinks of a guy who wants to get his mate a higher profile job that’s available (save him from that potential purgatory of being Norwich standard, if Lampard took that job and Norwich continue being Norwich for many years, or worse, stop getting back in the prem entirely) with emergency hesitance at hearing that this job opening may soon be unavailable because of an ideal candidate being mentioned. Gio is a bit of a prodigy as a manager, he proved it in the Eredevisie by breaking up the dual-hegemony of Ajax and PSV to bring Feyenoord their standard title a decade record. Disrupting those two happens when their standards decline, Feyenoord have a very good season, or both things happen. Gio has an affinity with the club, has experience of beating the favourites to win titles, while Lampard’s stock declines by every impressive Thomas Tuchel inspired performance.

Nothing really against Lampard, don’t have any love for Rangers, but I thought this Bambi stuff was resolutely embarrassed into submission and find myself annoyed at it’s continued promotion.

Yes, Gio manages in China (or did, not keeping tabs), but it’s not the same issue there with managers as it is for players, for managers it’s a big pay day and a period of break from the scrutiny of competitive management. I bet if Mourinho spent a couple of seasons in China (or whatever the new China is right now as last I heard the csl was abandoned or plateauing anyway) he would have his bank balance looked after as he is used to but be refreshed from the experience. Managers aren’t players, players die out there falling prey to big fish in really small water syndrome.  Managers get a bit of bank and then fuck off back to more competitive surroundings.
Dave (do people really laud Simon Jordan or did I dream hearing that?), Dublin

Southgate is learning nothing…
So, England thump a team 60 odd places below them 5-0. That’s as hard as beating San Marino or Andorra (ohhh) by a similar amount. As we race towards competing in the World Cup Finals next year, it does raise some questions though.

Given the paucity of the opposition, why play with 5 defenders, and 2 holding midfielders? Does this mean we are going to use this structure again given its failure against actual competitive opposition? And what do you learn by deploying it against Albania?

At the same time, what was Southgate hoping to learn from playing Kane, Sterling, Henderson, Maguire, Stones, and Walker (god love him) against Albania?

More particularly, how has this helped him with any Plan B, injuries (to Kane for instance), or frankly anything he didn’t already know – apart from James being a bit tasty.

Given that the score would have been 5-0 even if we played with the U20’s, surely giving invaluable England game time to a combination of Ramsdale, White, Tomori, Bellingham, Foden as the midfield general, Saka, Sancho, or Greenwood. might be worthwhile?

However, as we know of this coach, he doesn’t trust these kids to play in even crap World Cup qualifiers, let alone major games, but is quite happy to throw them in cold and untested for the most important penalties that England have ever faced.

That, apparently, is management at the top level.
Matthew (ITFC)

Wise up on the wobble
“So why is it that when West Ham threw away CL football last year by only picking up 9 points over 8 games, it’s described as a wobble, but when United pick up 10 from 8 games that include arguably the top two sides that’s a sackable catastrophe”

Well there’s a major bloody different badwolf, one is a team that almost all of us would argue are a mid table premier league side punching above their combined weight to be in the situation they were (and are) in the first place.

Another is one of, if not, the most recognisable sports teams in the world, a goliath of world football who are synonymous with success (and let’s not forget they’ve spend a nice little billion worth of money on transfers since old Alex), who won the treble and dominated English football for nigh on 20 years.

So yeah, there is a slight difference between the two, wise up
Daragh Milsom

CB to DM
To take a break from the constant soul searching over Ole, which is turning into something more monotonous than the last 2 seasons of Lost, I got to thinking about 2 issues. Liverpool’s midfield injury ‘crisis’ (it isn’t but that’s how things work these days), and the interminable triangle of mediocrity that is McFredMatic.com.

A couple of years ago as Daniel Agger was regressing I always thought he would have made a great defensive midfielder. Last seasons issues with all of our defenders out Liverpool moved seemingly everyone back there to have a go. This season with having a few out I wondered whether Matip could actually step up and do a job with Konate filling in at the back. I then realized Liverpool also have Gomez who seems ideal for the role too. Crisis over…..

So onto the other teams:-

Man Utd – could Lindeflop do a job in the middle being paired with Van De Beek ?
City – John Stones to replace Fernandinho
Chelsea – Maybe Christensen but they have 42 players so no need
Arsenal – Ben White could do a job if required
Spurs – errrrr, might explain why there is such an issue there.
Other teams ?

Just a thought, during international week. So whilst your are deeply engrossed in the Azerbaijan vs Qatar glamour tie of the weekend, think it over…..
Hong Kong Ian (Mulling over Kane or Ronaldo transfer for captain in the Fantasy…..) LFC

Why is the England job full time?
Can someone tell me why being England manager is a full time job?

You can’t argue with the result and the first half, but you probably have to credit Conte with the transformation of Kane and the instruction to actually play as a striker (something Southgate couldn’t seem to manage over the Summer) that made the difference.

So really, what does the national manager do apart from go to a few games and pick a squad and team.

Would make it far more likely to get a decent manager too if it was part time.
Badwolf

Steve Bruce’s legacy…
Interesting article but whoever put it together overlooked the brilliant legacy of Steve Bruce’s brief spell managing Crystal Palace. Brilliant legacy? He walked out on Palace for what he saw as a bigger opportunity at Birmingham. Yeah, so what? He then sent Andy Johnson the other way!
Eagle in Exile near Athens in Greece

Celtic vs PSV
So Graham Simons wrote in on Saturday and opened his mail with “In what universe are PSV bigger than Celtic?”, now this is an interesting opening line, even more so when he goes on to claim “even Ajax arent bigger than Celtic”, which is quite the statement, an incorrect one mind you.

So i did my own research and this is what i found out, if we look at the UEFA Club Coefficients we find that Ajax are ranked at 17th in Europe with Celtic at 49th and PSV at 52nd, so Ajax are certainly ahead in that category but how about we look at silverware in a club’s history:

So clearly domestically Celtic clean up here, however we do often judge a team by their European progress and that is where Ajax clearly clean up on this debate, the best part of the debate for me though was when Graham and i must quote him here “Celtic haven given the world the likes of Kenny Dalglish, Kieran Tierney…”, i am sorry but Kieran Tierney? really? behave yourself now please.

Overall yes i would say that Celtic are clearly a bigger side than PSV, however bigger than Ajax? not a chance, that debate is just not even up for discussion and if you point at Tierney and Dalglish then Ajax fans i am sure will just point at Johann Cruyff, Piet Keizer, Ruud Krol, Dennis Bergkamp and Marco van Basten.
The Admin @ At The Bridge Pod