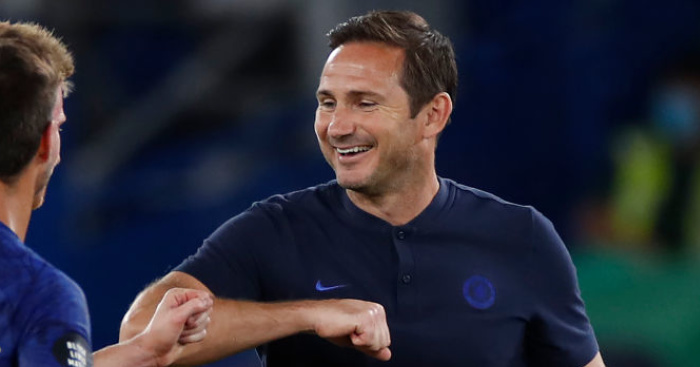 Frank Lampard congratulated Liverpool on their maiden Premier League trophy win, and gave a measured response regarding Chelsea’s progress despite their finest result of the season.

Chelsea secured a 2-1 victory over Man City to hand Liverpool their first domestic crown since 1990.

The victory came via goals from Willian and Christian Pulisic, and ensured the Blues stayed on course for a top four finish.

When asked in his post-match press conference if he had a message for Liverpool, Lampard said: “For the last three season themselves and City have been out on their own. It’s a gap we want to bridge.

“They are two of best teams in the world. Credit to them for what they have done.

Despite the fantastic result, Lampard took a measured approach when quizzed on Chelsea’s progress.

“One result and good performance is a great feeling tonight,” he added.

“There’s a clear gap. It won’t happen overnight with one or two signings. There’s still a lot of work that needs to be done.

“We can be better with the ball but we need to be happy with the result.”

See how all the events from Stamford Bridge unfolded via the F365 score centre here.

Veteran Willian produced a superb display, and capped it off by slotting home the winning penalty. Both he and fellow goalscorer Christian Pulisic’s efforts were recognised by the boss.

“Willian’s been great this season,” said Lampard. “Players look up to him. It’s a continuation of his form.

“Christian [Pulisic] came in with a lot of talk but he didn’t get a break. He got a tough injury and we wanted to protect him against Villa.

“He was always going to start against City. He needs to keep working.”