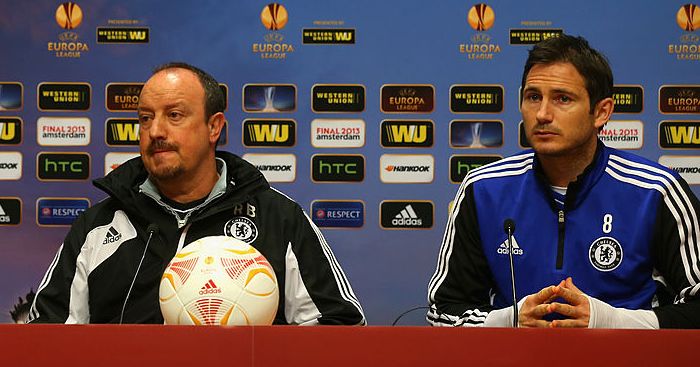 Forget Lampard; get Rafa
I agree with skinnyman in that lampard will make a great Chelsea manager at some point in the future, how ever he has one season of experience and the chelsea job is as deep end as it gets. I do not think he is ready for that step up yet, and the last thing I want to see happen is a club legend thrown to the wolves before he is ready to fight them off.

I believe Benitez is a better option at present look how well he has done using the resources he is given at Newcastle which is basically how chelsea works the board give the manager players and tell them to make it work. And for the connection with the fans I’d say they all need to relax and give him a chance look how well he does under tighter restrictions at Newcastle than he would have at Chelsea. He is also not afraid to play youth either just look at Isaac Hayden and Sean longstaff. In short give Benitez 3 or 4 years to see what he can do and if that goes pear shape turn to Lampard then.
Aaron. CFC. Ireland (or Hasenhuttl i really like that guy)

Is there no worry?
Dear Editor,

I was reading the mailbox this morning, in particular the email from Skinnyman, and the prospect of Frank Lampard as Chelsea manger

As a similar example, I used to worry (particularly before Klopp was appointed), that Liverpool might appoint Gerrard. It’s a nice story in the making and not to say I wouldn’t like to see this in future, but at the time (post-Brendan) it could have been a disaster. The jury is still out at Rangers, with some arguing for great progress, others saying it’s merely par for the course and they are no closer to Celtic, although only one year in, so plenty of time.

I think Lampard has done a fine job at Derby, and there’s no doubt he was a world-class player (always used to hate watching him play against Liverpool!), but is one season in management enough to look at the Chelsea job? Expectation will be sky high and there’s little room for manoeuvre with the Chelsea board.

So I guess my question is, do Chelsea fans think it’s worth the risk? Or would you rather see a short to mid-term appointment (not that I know who it would be!) and wait a bit longer to see what happens at Derby?
Marc

I get why Chelsea fans would love to see Frankie Lamps as manager but, from a career point of view,  he’d be mad to take the job wouldn’t he?  Transfer ban or not, and a proven ability to bring kids on or not, he’s going to fail to meet the ridiculously high bar Abramovich sets for all managers surely?  Where does he go after it inevitably ends in tears?

I hope he doesn’t do it.  Massive fan of him as a player and very impressed with what he’s done at Derby.  Hope he stays there and proves himself a top coach rather than jumping into the fire too soon.

Boor.  Noun.  A rough and bad-mannered person.  E.g.  “At last the big obnoxious boor had been dealt a stunning blow for his uncouth and belligerent manner”.

In response to Skinnyman’s email, I think we need to speak about Frank Lampard.

Chelsea have a free hit with the management appointment this season due to the transfer ban. That’s probably why the board are considering Rafa. They wouldn’t hesitate to sack Rafa in 12 months when the ban has been served because the fans will want him out.

There are several issues with considering Rafa but the biggest among them seems to be the key fact that Rafa’s strength is in organizing a team defensively and making them hard to beat. That’s not what Chelsea need. Our defensive record isn’t our problem. Yes, it could be improved but it’s not what has held us back since our last title success.

What’s held us back? Our attack.

Diego Costa was brilliant and there’s no point in cribbing about Antonio Conte’s “thanks for the seasono” text message break-up. It was the wrong way to do it but Diego Costa wanted to leave – we needed a replacement for him (no matter how Antonio Conte chose to remove him).

Since Diego Costa left, our attack has been blunt. Morata, Giroud and Higuain haven’t even come close to filling the aggressive shoes of Diego Costa.

The brilliance of Hazard has kept us afloat since Costa left but this over-reliance on Hazard made us incredibly vulnerable. Man-mark Hazard and Jorginho and Chelsea do nothing but break passes and possession records.

Now. Where does Frank Lampard fit into this conversation? Given the transfer ban, Frank has no choice but to work with what he has. What does he have? Giroud, Morata, Batshuayi and Tammy Abraham.

I firmly believe that Frank, if he’s appointed as Chelsea’s new manager, will play Tammy Abraham as our striker. He will also give Batshuayi a chance – he may even try playing them both. Playing Batshuayi and Abraham up front is definitely worth a shot.

I personally don’t care if Frank is a PFM – I hate that PFM crap. If Frank gets the gig he will probably do the same thing that Ole did at United. He will chose the youth and give priority to the young English players.

If Frank does those two things then the fans will be on-side and if the fans are on-side then the board won’t sack Frank. Even if they are mid-table at Christmas, the board won’t sack Frank because at that point it’s too late to find a miracle worker. All they could do is ask Hiddink back for a third time and I don’t think that’s an option anymore.

In summary, Frank is worth a gamble because:

1. He will be dying to be the first Chelsea manager to give the fans what they want – the opportunity to see young Academy players.
2. He has a free season of transition where the absolute maximum he could be expected to achieve is top four and it looks very much like it will be a four way battle between Chelsea, Spurs, Arsenal and United for the two remaining spots below City and Liverpool.
3. Frank is the best available chance of having something which the team has been missing for such a long time – a manager which can keep the players on-side. José, Conte and Sarri all lost the players to varying degrees and it ultimately impacted the performance. Perhaps Frank having only recently sat in the Stamford Bridge dressing room is the manager who can do what Pep, Klopp and Poch have done so well – keep the players happy and keep the team unified and performing consistently.

There’s a lot that remains to be seen. Will Sarri leave? Will we appoint Frank? Will the transfer ban be enforced?

Despite all these questions I think the biggest question of all is this – where will the goals come from next season?

That is Frank’s first order of business. Who will play up front? What formation will they use? Where, oh, where will Kante play?

Past performance is the best indicator of future behavior. If Frank is appointed, Frank will be sacked – probably within a few years. The most we can hope for is that Frank might break the wheel (pardon the Game of Thrones reference).

What Chelsea fans need Frank to do is to prove that Academy players can be promoted to the first team without a detrimental impact to the quality of football. Break the wheel Frank!

When Frank is eventually sacked, and we all know he will be, then we will be able to look back at his appointment as being the dawn of a new era at Chelsea. Only then can we appoint Chelsea’s version of Pep, Klopp or Poch.

Thanks.
Tim (CFC) Ireland
PS – just to get in there before anyone else says it – yes, Fat Frank is the ideal person to break the wheel cos he’s so fat blah, blah, blah. Grow up!

Rivaldo review
Look, plenty of us are old enough to remember Rivaldo.

His brilliance, his actual dominance of being the best and most effective football in the world on the biggest stage for two full years was eclipsed almost immediately by the short reign of Ronaldinho, himself swallowed whole by the emergence of Messi and Cristiano Ronaldo.

But in the galactic soup of murky and ephemeral brilliance before these superplanets formed there was a collection of players across leagues and teams that actually battled it out year on year for the props to be the world’s best from a panel of probably a dozen names.

Rivaldo, for two seasons, burned brightest. He was an inspiration in that Barca team, he cannot be summed up in a perfunctory mention of that hat-trick and then tossed aside with a balancing reference to clutching his face when a ball hits his knee. That’s a woeful disregard for his creativity, consistency and ability to deliver at the critical moments in a manner that rendered opposition players meaningless.

The other thing worth pointing out is that his quote on the matter is 100% correct. An opposition player hammering a ball at you when it’s not in play is the type of stupidity and lack of discipline you punish. The attitude that the blatant theatrical villainy of clutching your face instead of your leg is somehow much worse of a transgression is, well, ridiculous. It’s the line of thought that says kicking an opponent is worse than exaggerating contact. It’s not worse, but it’s a more considered method of cheating. I don’t know what’s not to like about that versus the regular type, it’s more amusing and less likely to injure anyone.

Anyway, in summary, the article is based on a faulty premise- I don’t know anybody of a relevant vintage who thinks of Rivaldo and thinks of a spoiled legacy. I’ve fifty brilliant Rivaldo memories before I remember that he invented Sergio Busquets.
Darragh, Spurs, Ireland

Obamacare and VAR: revisisted
Debating the intricacies of Obamacare is probably the one thing less interesting to the average mailbox reader than debating VAR, but in reading the responses to my analogy in this morning’s mail, I had a few brief comments:

Reading it back, I understand my analogy may have come across as a European judging the American people. To clarify, I’m American; it was self-critical rather than judgmental. This absolutely does not mean that I’m right, but given that R-Man and TX Bill both resorted to an ad hominem arguments about me being European, it seems relevant to point out.

If TX Bill wants politics to be kept out of football, amigo, you’re probably reading the wrong football website. Also, when he complains about Obama promising everyone would keep their doctor, and this not being the case when the bill was passed – that’s exactly the kind of problem created by political compromise ideas referring to. You’ve kind of helped proved my point there.

Please for the love of God can we end this derail on the merits of health policy.

Lampard will probably be fine, Chelsea will be a bit worse, but it will be blamed on the loss of Hazard.
Dan, Plastic LFC

Walt dies
Can we stop with spoilers of a tv show on this site please!!!The two do not mix!!!