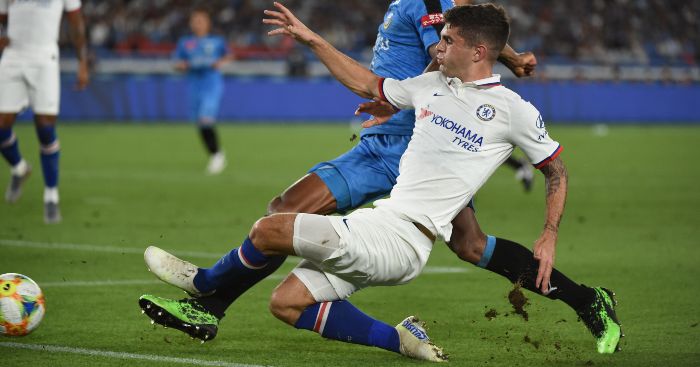 The substitute’s late effort in Yokohama settled a game into which Frank Lampard’s men had gradually grown, but the Premier League outfit, who handed a debut to Christian Pulisic as a second-half replacement, could not make the breakthrough.

A Chelsea starting line-up which included Willy Caballero, Mason Mount, Kenedy and Michy Batshuayi, struggled to break the hosts down with Pedro forcing an early save and sending another shot just over the bar before Kenedy blasted just wide from distance.

However, Caballero had to make a late save to deny the J League champions a half-time lead.

Lampard made changes at the break with Davide Zappacosta, Andreas Christensen, Emerson, Ross Barkley and Olivier Giroud replacing Cesar Azpilicueta, Kurt Zouma, Marcos Alonso, Pedro and Batshuayi, but it was Mount who came close to opening the scoring with a curling effort within three minutes of the restart.

Giroud was denied by a solid save from a 75th-minute free-kick, but Damiao, who had earlier sent a diving effort just wide, headed the home side in front with two minutes remaining and his contribution proved decisive.

Speaking afterwards, Pulisic told Chelsea TV: “I’m really happy to be here with the team and to get in an actual match for the first time feels really good. We wanted to come out with a win, but I’m definitely happy.

“They were a very good opponent. They tested us for 90 minutes and they scored a good goal in the end.”

Asked how he was enjoying working with Lampard, Pulisic replied: “It’s been great. I grew up watching him and to have him here giving me pointers and helping the team, it’s awesome to have him around.

“It’s nice to have a guy that we can really relate to, so it’s been great so far.”