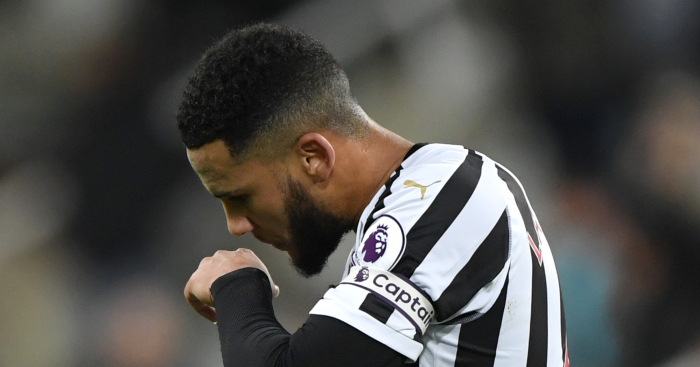 Newcastle might not have avoided Premier League relegation without Jamaal Lascelles last season. Ayoze Perez was their top scorer, but accounted for just 20.5% of their goals. The Spaniard was level with Matt Ritchie for most assists with a pitiful five. Rafael Benitez soon decided that defence would be his best form of attack, and his captain would therefore be crucial.

Absence only made the heart grow fonder. Lascelles missed just five Premier League games last season but they provided a worrying snapshot of life without him. They lost four and drew one, conceding 31.9% of their entire league total, and allowing three goals or more four times in just three weeks. They would do so just once in the other 33 games Lascelles featured in.

The last game in that abysmal run came 12 months ago to the day as Leicester ran out 3-2 winners with a late goal at St James’ Park. It left Newcastle in 16th on 15 points, staring down instead of looking up, panicking instead of planning for the future.

The more things change and all that. Defeat to Wolves in the closing minutes of a game that was once within their grasp but eventually slipped through their fingers means Newcastle are 15th on 13 points, and the corners turned against Bournemouth, Burnley and Everton led them only to a dead-end. Braintree, bottom of the National League, are the only club in England’s top five divisions to lose more home games this season.

But the most worrying aspect was the performance of the previously precise Lascelles. If his mistake for Diogo Jota’s opening goal can be passed off as an isolated incident, his refusal to tackle the same player before Matt Doherty’s dramatic winner points to an outbreak of concentration lapses on Tyneside.

Lascelles should have done more to stop the shot from Jota leading to Doherty winner. A lot of this defeat for NUFC has been self-inflicted.

There must have been something about Jota that rendered Lascelles unable to function properly, like a love-stricken schoolboy. He first played the forward onside and let him control the ball six yards out and score, before backing off all the way into his own penalty area as Jota flashed a shot against the post that Doherty converted.

A centre-half who was undroppable last season is verging on unusable in certain circumstances this. Benitez stated that “it is important to have competition in each position” last month, and centre-half is no longer the exception to that rule. Federico Fernandez has been excellent since joining, Fabian Schar has hardly put a foot wrong, and Ciaran Clark is a reliable hand. His ceiling is lower than Lascelles’, but is less likely to cave in at any moment.

The message from the manager was clear: there is no guaranteed starter in this side. Lascelles is in an unfamiliar position of having competition for his place. Rather than thriving, he is striving to barely keep up.

Against Wolves, Benitez used a three-man defence for just the fifth time this season and it is now safe to suggest it is a system Lascelles does not suit. He was dropped after reportedly airing grievances with the tactic in August, leading to a training-ground fight with Matt Ritchie. If it went anything like his battle on Sunday, Lascelles suffered a resounding loss.

He might bounce back; he certainly has the talent and leadership skills to. But he has played just 45 minutes of the club’s three league wins this season – and they came in the first half of the victory over Watford, which they were drawing 0-0 at half-time. For now, Newcastle look much better without their captain than they do when he is trying to  steer the ship.