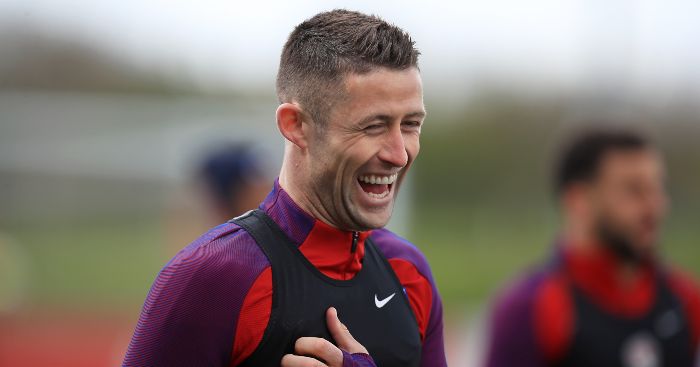 With Conor Coady establishing himself as one of few England defenders capable of not giving away a penalty or getting sent off and Kalvin Phillips now a familiar name at the heart of midfield, it appears as if players from outside the ‘Big Six’ are getting more of a chance than ever to become regulars for the national side.

Matt Jarvis was the last Wolves player to represent the senior side before Coady and you have to go all the way back to Alan Smith in 2004 to find the last Leeds player prior to Phillips. Here’s an XI made up from those who remain the last players to date to have lined up for England whilst on the books at a particular club, with only sides who haven’t had a player called up this year included.

Goalkeeper: David James (Portsmouth)
Sol Campbell, Peter Crouch, Jermain Defoe and Glen Johnson were all on the books at Portsmouth whilst representing their country but David James remains the last player from Pompey to have worn the Three Lions with pride. England’s sixth-most capped goalkeeper of all time made his last appearance for the national side back in 2010 – the same year Portsmouth suffered relegation from the Premier League. If you fancy a goalkeeper challenge, try naming a keeper who remains the last player from two separate Championship clubs to have lined up for England.

Right-back: Earl Barrett (Oldham Athletic)
Warren Barton will forever remain Wimbledon’s last England player but as the club no longer exists in the same form, former Oldham Athletic defender Earl Barrett takes the right-back slot. He became the fourth player from the club to represent England back in 1991 and with the Latics sliding out of the Premier League at the end of the 1993/94 season, no-one has repeated the feat since.

Centre-back: Gary Cahill (Bolton Wanderers)
Along with Oldham and Bradford City, Bolton Wanderers make up a trio of former Premier League clubs now playing in League Two. Long before away days to Harrogate were on the schedule, Bolton regularly supplied the England national team with players. Two-time Premier League winner Gary Cahill was the most recent of a 28-man list that includes Nat Lofthouse, Eddie Hopkinson, David Jack and of course… Michael Ricketts.

Centre-back: Lewis Dunk (Brighton & Hove Albion)
Current Brighton captain Lewis Dunk made his first and only England appearance back in 2018, starting in a 3-0 win against the United States. He became the first player from the club to represent England since the 1980s, when Steve Foster and Peter Ward won caps under the management of Ron Greenwood. Tariq Lamptey next?

Left-back: Stuart Pearce (Nottingham Forest)
With more European Cups to their name than every team in the country not named Liverpool or Manchester United, Nottingham Forest naturally have a long list of former England internationals linked to the club. Thirty-seven players from the City Ground (or the Town Ground if you want to be pedantic and go back to the 1800s) have lined up for the Three Lions, with Forest legend Stuart Pearce the last man to do so back in 1997. Andy Hinchcliffe (Sheffield Wednesday) and Nicky Shorey (Reading) are other options at left-back.

Right-wing: Andros Townsend (Newcastle United)
Andros Townsend’s appearance in England’s 2-1 win over Australia in May 2016 makes him the last player from Newcastle United to have won an England cap. Andy Carroll and Jonjo Shelvey seem unlikely to ever earn a recall, whilst Karl Darlow, Isaac Hayden, Jamaal Lascelles and the Longstaff boys all seem a million miles away from senior international honours. Long gone are the days of multiple Magpies in the squad at the same time. It’s all on you, Callum Wilson (who is already eligible for this side as Bournemouth’s representative).

Central midfield: Ruben Loftus-Cheek (Crystal Palace)
Having last played for the Three Lions back in November 2016, Townsend would also qualify for this team as Crystal Palace’s latest England international if it wasn’t for Ruben Loftus Cheek’s loan spell at Selhurst Park in the 2017/18 season. Fulham are the latest team to have a lend of the Chelsea midfielder but Loftus-Cheek made his national-team debut whilst on the books at Palace, becoming the 14th England international from the club after the likes of Ian Wright, Kenny Sansom and Nigel Martyn.

Central midfield: Nathaniel Chalobah (Watford)
He might have an England career shorter than Reece James’ temper but Nathaniel Chalobah’s extra-time appearance in the 3-2 Nations League win over Spain back in 2018 made him Watford’s fourth England international. Ben Foster, John Barnes and Luther Blissett are the other Hornets to have represented the Three Lions. Jake Livermore (West Brom) is also an option in midfield, as is Seth Johnson (Derby County).

Left-wing: Stewart Downing (Middlesbrough)
Thirty players have won a cap for England whilst on the books at Middlesbrough, with stellar names like Steve Bloomer, Gary Pallister, Paul Gascoigne, Paul Ince and Wilf Mannion on the list alongside Stewart Downing: the most recent of the lot. Downing played for the Three Lions in March 2009, months before leaving the Riverside for Villa Park following Boro’s relegation from the Premier League. Anyone remember who was managing Middlesbrough that season?

Striker: Les Ferdinand (QPR)
Les Ferdinand remains the last QPR player to have represented England, with the much-loved striker making an appearance for the Three Lions whilst on the books at Loftus Road in 1994. Ferdinand left a year later and without his goals, Rangers slipped out of the Premier League and didn’t return until 2011. Sticking with London sides, Bobby Zamora remains the last Fulham player to have won an England cap, following his appearance against Sweden in 2011.