Home F365 Features Laters, yeah? One per club who would not be missed 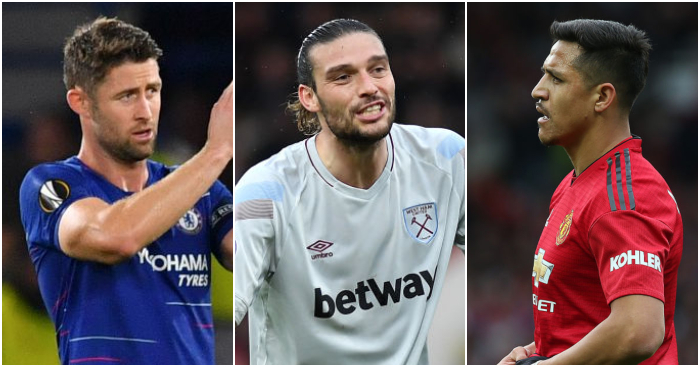 Not everyone on this list will leave their club this summer. But through a mix of performance level, potential fee, age and wages, they would not be missed. Here’s last year’s list in full…

ARSENAL – Shkodran Mustafi
When Daily Telegraph scribe Matt Law wrote that Arsenal players were ‘baffled’ last week, at the centre of their bafflement was Unai Emery’s continued commitment to picking Mustafi in central defence. But it seems that the Spanish manager is not committed to the error-strewn German in the long term, with reports suggesting he is up for sale this summer along with roughly half the squad. Nobody will miss him.

Last year: David Ospina. He went on loan to Napoli; he was not missed.

BOURNEMOUTH – Asmir Begovic
When 19-year-old Mark Travers was between the sticks for the Cherries’ last home game of the season so that Artur Boruc could exit sharpish to attend the birth of his child, there was no sign of Asmir Begovic, who has started only four Premier League games in 2019. Rumour has it that his Bournemouth career is over and he is on his way back to Stoke.

Last year: Benik Afobe. He went to Stoke via Wolves; he was not missed.

BRIGHTON – Markus Suttner
No poor bugger wants to be Brighton’s third-choice left-back. He spent the second half of the season on loan at Fortuna Dusseldorf and, at 32, will not be content to come back and watch Gaetan Bong – who was inexplicably given a new contract – and Bernardo take turns to play to the left of the Dunk/Duffy axis of heading.

Last year: Sam Baldock. He joined Reading; he was not missed.

BURNLEY – Stephen Ward
No Premier League starts since August for the Irishman who will be turning 34 at the onset of next season. Ward is out of contract at the end of this campaign and will end five years of Burnley service in which he has finally been usurped by Charlie Taylor. Nobody will notice outside this little corner of east Lancashire.

Last year: Nakhi Wells. He went on loan to QPR; he was not missed.

CARDIFF CITY – Jazz Richards
He was single-handedly flying the Welsh flag at Cardiff this season, but has played just 96 minutes of Premier League football. It’s time to go. Astonishingly, he is still only 28 despite having been seemingly playing first-team football for about 23 years.

Jazz Richards – 2.5/10: Doesn’t look interested looks like he’s out of love with football. Isn’t getting much time at Cardiff. Should look for football elsewhere pic.twitter.com/OaMCyiW8OH

CHELSEA – Gary Cahill
He has played 22 minutes of Premier League football this year – and one of those came in his farewell on Sunday against Watford. Some journalists argue that he deserves better treatment, but he has turned down opportunities to leave the club in favour of staying and allowing his contract to run down. Any remaining sympathy was eradicated last week when he attempted to rock the boat on the eve of a key game. Good riddance.

Last year: Danny Drinkwater. He went nowhere; he really should have done.

CRYSTAL PALACE – Bakary Sako
It now seems hard to believe that as recently as January, Palace were so desperate for bodies that they brought back Bakary Sako on a short-term contract. He will leave this summer after playing 23 more minutes of Premier League football that basically nobody will remember.

Last year: Christian Benteke. He went nowhere; he really should have done.

EVERTON – Cenk Tosun
Sam Allardyce’s legacy, the Turkish striker has not started a Premier League game since February and not scored a Premier League goal since October. The legs are willing but they simply do not move fast enough for English football. He will return to Turkey and nobody will mourn his exit.

Last year: Wayne Rooney. He went to the US; he was not missed.

FULHAM – Lazar Markovic
Having basically been released by Liverpool in January, the Serb will be released again by Fulham in June, having played a grand total of 45 minutes for the Cottagers in a season which has ended in miserable relegation. Ta-ra fella, you really will not be missed. By anybody anywhere.

HUDDERSFIELD TOWN – Steve Mounie
Those two goals against Crystal Palace on the opening day of last season seem a long time ago now (to be fair, they were quite a long time ago) as the Benin international has been replaced and usurped by Karlan Grant. He will presumably return to the lower reaches of Ligue Un while Town battle in the Championship with a very different squad.

Last year: Rajiv van La Parra. He went to Middlesbrough on loan and was then sent back; he was not missed by either club.

LEICESTER CITY – Danny Simpson
There is no place for a 30-something right-back at Brendan Rodgers’ Leicester City and Simpson will become the latest title winner – along with Christian Fuchs and Shinji Okazaki – to depart the club at the end of this season. The signing of the excellent Ricardo Pereira pretty much sounded the death knell for Simpson’s Premier League career and he has not kicked a ball in anger under Rodgers.

Last year: Daniel Amartey. He stayed but ankle problems have kept him out since October.

LIVERPOOL – Alberto Moreno
We will forgive you for forgetting, but Moreno has actually played a part in Liverpool’s advance to the Champions League final; he played eight minutes at the end of a 4-0 win over Red Star Belgrade in October. He was last seen losing to Wolves in the FA Cup in January and has barely made a bench since. The latest rumours suggest he will be joining Benfica this summer. He will not be missed.

Last year: Simon Mignolet. He stayed and will presumably leave this summer.

MANCHESTER CITY – Eliaquim Mangala
Eyebrows were raised when the Frenchman signed a new one-year contract extension in March, but that was basically so that Manchester City can claim a few quid this summer for a ‘footballer’ who has not actually played one first-team minute this season. All in all, a £42m move from Porto has gone really very excellently for the Premier League title winner.

Last year: Yaya Toure. He left, joined Olympiakos, left Olympiakos and is now without club. We miss him but City do not.

MANCHESTER UNITED – Alexis Sanchez
When your ‘player who would not be missed’ is also your highest paid, there is a problem. About 500,000 problems a week. It seems likely that Manchester United will pay Sanchez and/or another club to take him off their hands this summer after what will have been 18 disastrous months. The problem for Ole Gunnar Solskjaer is that there are about 17 other names we could put on this list.

Nobody could have foreseen it to be this bad, but genuinely believe Alexis Sanchez to United is the worst transfer of all time.

NEWCASTLE UNITED – Joselu
Poor Joselu. He was signed by Newcastle two years ago because he was the best they could find for £5.5m and now he cannot even make the match-day squad and has not scored a Premier League goal since August. His record for the Toon currently stands at seven goals in 52 games, which was pretty much to be expected after his four goals in 27 games for Stoke. Adios, fella.

Last year: Mikel Merino. He left for Real Sociedad; he was not missed.

SOUTHAMPTON – Wesley Hoedt
A few will leave Southampton this summer as Ralph Hasenhuttl picks through the legacy of employing a series of terrible managers. One of the first out of the door will be £15m defender Hoedt, who has spent the second half of the season on loan at Celta Vigo. But he could be followed by six or seven more. Though good luck to them in getting rid of this fella…

Last year: Fraser Forster. Somehow still there, picking up his reported £70,000-a-week wages for being the Saints’ third-choice goalkeeper.

TOTTENHAM – Vincent Janssen
We never imagined we would see Janssen in a Tottenham shirt this season but he has now played 23 minutes in the Premier League after emerging off the bench against Brighton and West Ham. They will surely be his last 23 minutes for Spurs as this summer will bring the exit that was scuppered last summer by a foot injury. Six goals, 41 games, three years.

Last year: Fernando Llorente. Still there, still clinging on and currently petitioning for a new contract.

On the basis of the last two evenings, something crazy is going to happen in the Ajax/Spurs game. Something crazy like Vincent Janssen scoring.

WATFORD – Miguel Britos
He’s 33 and has played under four Watford managers, but he is clearly not part of the fourth man’s plans and will leave at the end of this season. That will suit him fine; he fancies returning to Uruguay after 11 years in Europe and four in Hertfordshire.

Last year: Richarlison. We called it. He joined Everton for a large fee and FA Cup finalists Watford are set for a top-half finish.

WEST HAM – Andy Carroll
In seven years at West Ham, Carroll has played only 142 games as his body simply cannot cope with football. He has suffered a series of injuries, with the latest prematurely bringing an end to his season and his Hammers spell in February. It’s time for everybody to move on. Ta-ra big man; you had excellent feet for one so tall.

WOLVES – Leo Bonatini
It’s been over a year since he scored a league goal, and that year includes a pretty disastrous loan spell with Nottingham Forest. It’s time to call it quits and shuffle off back to Portugal, Brazil, Italy or wherever else Bonatini can find some confidence.