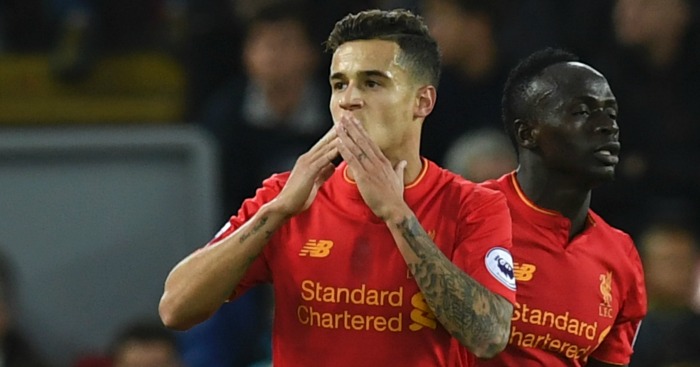 Former Liverpool defender Mark Lawrenson believes the club will not be able to keep the likes of Philippe Coutinho out of the clutches of Barcelona.

However, rather than bemoan the fact, Lawrenson urged fans to enjoy the brilliant football the Brazil international and his team-mates are producing which has turned Jurgen Klopp’s side into genuine title challengers.

“You can’t keep those top players if those clubs come in for them.

“I don’t think, apart from arguably Manchester City, anyone can stop them.

“The clever thing is to plan for it. Rather than say ‘Coutinho might be going, what are we going to do?’ you have something in place already.”

Daniel Sturridge is another player whose future appears up for debate.

The England international has yet to score a Premier League goal this season and is no longer first choice up front with Roberto Firmino performing the central attacking role.

There have been reports he will seek to leave in January – which is highly unlikely as injury to Danny Ings has already left Klopp one striker light – but Lawrenson said the 27-year-old should sit it out.

“It is a fantastic position for the club to be in,” said the ex-centre-back at a special Men United Arms Q&A event for Prostate UK in Preston.

“It’s like Klopp 1, Sturridge 0 because when Klopp came the questions were about how he was going to get him fit and now he is fit he can’t get in the side.

“But you don’t do anything with him at the moment. You can bring him on and he will score you a goal out of nothing.

“You can’t get players like him, he is different to what Klopp has and he would make one of the top team’s stronger so why would you sell him?

“The only way you get rid of Daniel Sturridge is if you have someone lined up to come in.

“It’s not a problem for Klopp – but it may be for Sturridge.”

Lawrenson also dismissed criticism of Liverpool’s inability to keep a clean sheet, with just one in the Premier League so far.

“(Manchester) City aren’t great at the back. Arsenal look okay but I wouldn’t seriously worry about Liverpool defensively,” he said.

“They create so many chances in games so what if they concede a couple?

“They are going to win so many of their games playing this way it will just be immaterial.

“There are 19 teams in the league who would like to be where Liverpool are.

“For me I think it (the title) is between them, City and Arsenal – who are both in Europe – so it is all in Liverpool’s favour. Enjoy it while it lasts – that’s the way Klopp is.”

:: Mark Lawrenson is supporting Preston North End manager Simon Grayson’s epic cycling challenge for Prostate Cancer UK in 2017. Grayson, who lost a close friend Steve ‘Garby’ Garbett to the disease, is taking part in the 145-mile Football to Amsterdam cycling challenge in June for a second time. He will be joined on the ride by former England internationals Les Ferdinand, Terry Butcher, Viv Anderson and Tony Woodcock. Sign up to prostatecanceruk.org/amsterdam before November 22nd and get a £25 discount on registration by using the code ‘PRESTON 25’.