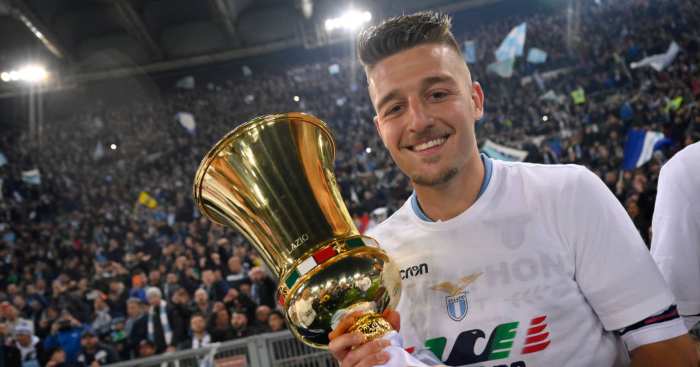 Lazio president Claudio Lotito hinted that Sergej Milinkovic-Savic will have the final say on his future amid reported interest from Manchester United.

The 23-year-old midfielder has been hot on the radar for clubs all over Europe for the best part of 12 months, with including United, Juventus and AC Milan all reportedly keen.

Gazzetta dello Sport insisted last week that United remain serious contenders for his signature and have seen an opening bid of £67million rejected by the Serie A outfit.

It was then claimed on Tuesday that the bid had been raised to £72m, while the player’s agent – Mateja Kezman – was understood to have been in England last week to hold talks with United over a prospective deal.

Now, Lotito has offered a typically cryptic summary of the situation surrounding Milinkovic-Savic, but he did suggest that the player will have the final word.

“We have created a glass house and understood that people cannot be forced to play their role in an environment where they feel restricted,” he told Corriere dello Sport.

“This is not the case with Sergej. He showed great affection, responsibility and seriousness. It will depend on the events and not on the club. Last year I managed to reject the assaults, this year we could propose a matter of respect if the player were to propose a different solution.

“Lazio will never be weakened, but always strengthened, there is no doubt about this: it is our understanding.

“All the promoted actions have as their objective the pride of the Lazio brand. We have moved from the phase in which no one believed in that of our objectives, today the team is permanently present in European competitions.”