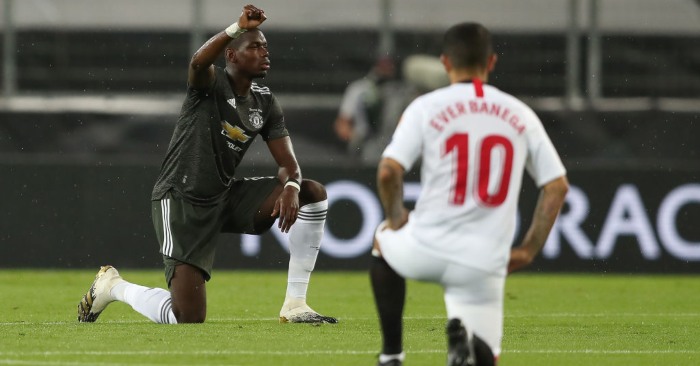 That 7/10 rating was mirrored on The Sun website, who wrote: ‘Passionate display embodied by his wide-eyed remonstrations with the ref after Sevilla equalised. Beautiful ball to Marcus Rashford right at the end of the first period – could easily have had a number of assists.’

He ‘could easily have had a number of assists’ because he created four chances; no Manchester United player created more. He also contributed nine dribbles (more than double any other player) and played more passes than any other United footballer.

An excellent individual performance on a frustrating night overall. 🙌 pic.twitter.com/yclNU6mygH

Read those stats again and try to explain why the Daily Mirror gave him 5/10 and said he ‘lacked influence when it really mattered, despite some trickery’. Some trickery? He dribbled past nine Sevilla players and created four chances.

David Anderson somehow contrived to give Pogba the same mark as Wan-Bissaka, Lindelof and Williams, and less than all of the attacking players who missed the chances that the Frenchman created. According to his colleague David McDonnell, Pogba ‘was at his most frustrating again, failing to exert any real influence, leaving midfield partner Fred to provide all the industry and belligerence to try to counter Sevilla’.

And of course, The Sun‘s Neil Custis concurred, writing: ‘Paul Pogba was once again disappointing last night. He could not get control of the middle of the park and kept losing the ball.’

The fact that he mentioned Pogba’s name before any of the defenders who were actually culpable for goals being conceded really does hint at a bizarre obsession. Odd then that he did not mention his name when writing about Rashford being ‘put through’ on goal right on half-time. ‘Put through’ by who, Neil?

“Paul Pogba has disappointed at times. He has been the lazy player tonight.”

Key passive
The opening paragraphs of The Sun match report:

‘After losing in the last four of the EFL Cup to neighbours Manchester City and in the semi-finals of the FA Cup to Chelsea this was almost too much to take.’

Because defeat is just something that happens to a great football team.

The big reveal
On The Sun website, they have the gall to put a ‘REVEALED’ tag on this:

However did they find out?

Miss right
Still, perhaps their target audience is the same people who seemingly ‘miss’ pretty much everything that happens on a pitch.

No. 1 in the Daily Star‘s ‘Five things missed as Man Utd stars clash during Europa League defeat to Sevilla’?

Why not just start with ‘Association football, more commonly known as football or soccer, is a team sport played with a spherical ball between two teams of 11 players’? After all, they might have missed that too.

Cheer up, it will never happen
In an effort to cheer up Manchester United fans, the MEN opt for this headline:

And the LIVE Saul Niguez news is that the Daily Star linked him with Manchester United THREE days ago.

Sancho Sancho Sancho
Over at the Express website, there is more good news for Manchester United fans…

Is that one thing ‘make an actual decent offer, at which point he won’t have to force a move because that’s what Borussia Dortmund actually want’? Yes. Yes it is.

‘An unsightly affair took place before Manchester United’s Europa League quarter-final with Copenhagen, which ended up with both UEFA and the Football Writers’ Association involved in what became an international incident.’

An ‘international incident’? That sounds serious. Those are not the kind of words you throw around willy or indeed nilly in the middle of a global pandemic.

‘UEFA rules around games behind-closed-doors state that each club is allocated 10 spaces for written media, with no more than one to be given to the club’s in-house media. With demand high and 20 requests, United subsequently turned down applications from The Guardian, The Daily Telegraph and The Independent.’

It sounds less interesting now. And certainly less like an ‘international incident’.

‘However, when it emerged that a writer for Abu Dhabi-based The National, who just happens to edit a United fanzine, was handed one of the precious passes, questions were asked.’

Oh. This now has the strong whiff of industry nonsense that is of interest to about 12 people.

‘Karen Shotbolt, United’s head of football communications, blamed UEFA, claiming that the governing body had carried out a ballot to decide who was given accreditation.

‘That prompted the FWA to get in touch with UEFA, who insisted no such ballot had taken place and that it was down to the clubs to decide who got the passes.

‘Not a great look, to say the least.’

Wipiedia defines an ‘international incident’ as ‘a seemingly relatively small or limited action, incident or clash that results in a wider dispute between two or more nation-states’. Is Keegan claiming that the the UK are about to declare an actual war on the UAE because Andy Mitten was allowed to watch a Europa League game?

Oh and Mitten – for it is he – also writes for The Athletic, GQ and The Sunday Times and is the author of 11 books. He also has more than three times the number of Twitter followers as Keegan. Welcome to 2020, fella.