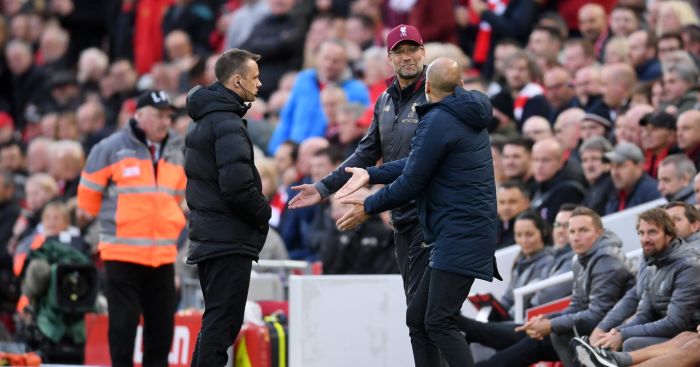 Former Southampton striker Matt Le Tissier has named the clubs he thinks will finish in the Premier League’s top four this season.

It is tight at the top of the Premier League table so far this season with just two points separating the top five teams after eight matches.

City, Liverpool and Chelsea have all now dropped points, while Arsenal and Spurs have recovered from slow starts.

And Le Tissier reckons it will City’s year again under Pep Guardiola but he thinks it will be much tighter this term.

“I think I will go with Manchester City, Liverpool, Chelsea and Spurs for the top four,” Le Tissier told Sky Sports.

“As long as Christian Eriksen doesn’t spend too long out of the team for Tottenham… because I think they miss him quite a bit.

“Manchester United have got some ground to make up if they are going to be in contention.

“I still think Manchester City will win the title.

“They have so much quality and strength in depth and over the course of the season that will give them the edge.

“Even without someone who was considered to be their best player last season in Kevin De Bruyne, they’re still sitting top of the table after eight games.

“Many people thought they were going to miss him a lot and obviously that quality of player is going to be a bit of a miss.

“But their strength in depth is just incredible and what they’ve got in terms of quality forward players and being able to hurt teams in different areas of the pitch.

“They should be a couple of points clear but Riyad Mahrez’s penalty against Liverpool was an absolute shocker.

“I don’t think they will win it by 19 points again like last season but I’d expect Man City to win it by a handful of points.”