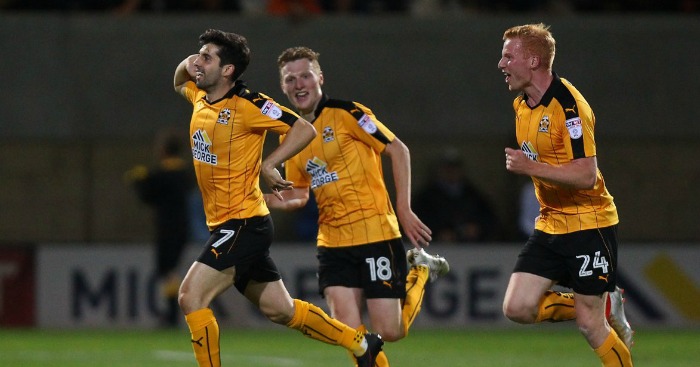 Ben Kennedy hit the only goal of the game as League Two Stevenage shocked Championship side Ipswich with a 1-0 League Cup win at Portman Road.

Kennedy was quickest to react after Dean Gerken could only parry a deflected shot from Charlie Lee eight minutes after the interval.

Louis Dodds struck the winner 13 minutes from time to earn Shrewsbury a 2-1 victory over Huddersfield.

Ajay Leitch-Smith had given the Shrews a flying start with a first-minute opener but Elias Kachunga hauled the Terriers level six minutes before the break.

But Dodds was to be the hero when he latched onto Ivan Toney’s ball to win it.

Josh Law popped up with an 83rd-minute winner to send Oldham through after a 2-1 win over Wigan and Anthony Stokes took his goal tally for the season to three with a brace as Blackburn won 3-1 at Mansfield.

Conor Coady helped Wolves to a 2-1 victory over Crawley and first-half goals from Joey van den Berg and Roy Beerens gave Reading a 2-0 win over Plymouth.

Cauley Woodrow hit a brace to help Fulham to a 3-2 win at Leyton Orient and Jamie Murphy scored a pair of goals as Brighton eased past Colchester 4-0.

Richard Keogh’s strike gave Derby a 1-0 victory over Grimsby and Millwall safely progressed to the second round after a 4-0 win at Barnet.

There were also wins for MK Dons, Peterborough, Gillingham, Rochdale, Carlisle and Cheltenham.

With the tie looking to be heading for penalties, Berry popped up to fire home the winner in the 118th minute.

Jack Dunn scored a hat-trick for Morecambe as Championship Rotherham were sent packing in an extra-time 5-4 defeat.

Ryan Harley scored in the 100th minute to give Exeter a 1-0 win over Brentford and Kevin van Veen struck twice in extra time to give Scunthorpe a 2-0 victory against Notts County.

Substitute Ryan Lowe scored both Crewe goals as they came from behind to beat Sheffield United 2-1 and Matthew Dolan scored from inside his own half as Yeovil sprung a shock by beating Walsall 2-0.

Northampton needed a John-Joe O’Toole header in extra time to beat Barnsley 2-1 and Liam Sercombe was Oxford’s goalscoring hero as he grabbed the winner in the 1-0 victory over Birmingham.