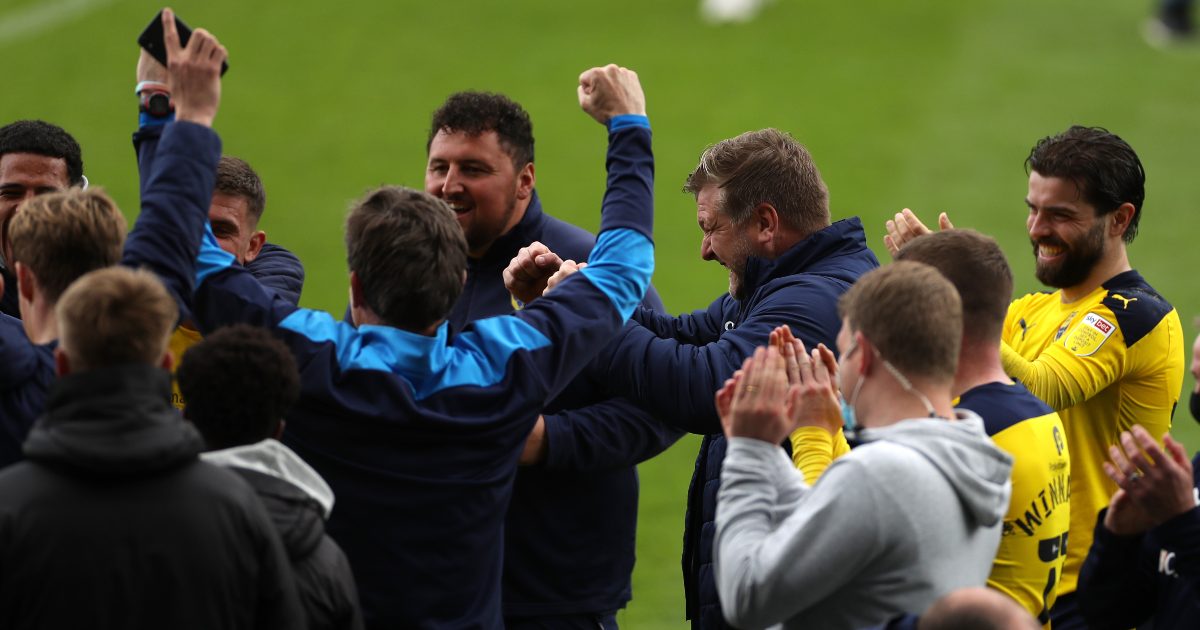 Oxford United hammered Burton to capitalise on Portsmouth losing to Accrington Stanley to secure the final play-off place in League One.

A 4-0 win over Burton on the final day of the regular campaign ensured Karl Robinson’s side kept up their part of the bargain of needing to win to keep alive their hopes of promotion.

Olamide Shodipo and Matty Taylor struck during the first half and Elliot Lee and Sam Winnall added gloss late on to help Oxford finish sixth, which completes a remarkable turnaround for a side who were in the relegation zone as recently as December.

Portsmouth dropped down to eighth after Adam Phillips scored the only goal of the game to earn Accrington a 1-0 win at Fratton Park on a disappointing day for Danny Cowley’s men.

Charlton’s faint top-six hopes were dependent on results elsewhere, but they were still able to finish on a high with a 1-0 win over champions Hull.

Jacob Greaves put through his own net in unfortunate circumstances with a quarter of an hour left when Matt Ingram could only push Liam Millar’s cross onto the defender. It was muted celebrations at the Valley though with the victory only enough for a seventh-place finish.

Peterborough sealed their promotion alongside Hull earlier this month and they signed off from the third tier with a sensational 4-1 win at Doncaster.

Mohamed Eisa, Niall Mason, Idris Kanu and Ricky-Jade Jones netted in the first half for Darren Ferguson’s men who clinched a 26th league triumph of the season despite a late Tyreece John-Jules consolation.

Blackpool made certain of third spot with a narrow home success over already-relegated Bristol Rovers with Ellis Simms grabbing the only goal in the 75th minute and they will face Oxford in the play-offs.

Sunderland and Lincoln remained in fourth and fifth following low-key draws at home to Northampton and AFC Wimbledon respectively and will meet later in May at Sincill Bank first before the second leg takes place at the Stadium of Light.

The Black Cats looked set for a shock defeat until Carl Winchester levelled three minutes from time to cancel out Sam Hoskins’ late opener for Town, who will ply their trade in League Two next season.

Wimbledon secured survival last weekend and concluded the term with a stalemate at Lincoln, finishing four points clear of the relegation zone in the end.

Rochdale bid farewell to the division with an excellent 3-0 win away to MK Dons following second-half goals by Aaron Morley, Jimmy Keohane and Stephen Humphrys.

A seven-goal thriller saw Swindon, another side relegated, edge out Wigan with a Scott Twine brace earning them the points on the road.

Hallum Hope and Tyler Smith were also on target for the Robins, who did trail 3-1 at one stage following a Will Keane double and Curtis Tilt’s opener for the hosts.

In some of the other dead-rubbers, Ipswich ended a frustrating campaign with a 3-1 victory over Fleetwood after James Norwood, Gwion Edwards and Troy Parrott scored during the opening half an hour.

Goals were forthcoming at Crewe too, who beat Shrewsbury in a five-goal encounter after Chris Porter added to Mikael Mandron’s early brace.

Vadaine Oliver grabbed the only goal at Gillingham who confirmed a top-half finish with their narrow win over Plymouth with the visitors potentially more worried about Kelland Watts after he was forced off early on with a head injury and left the pitch on a stretcher.