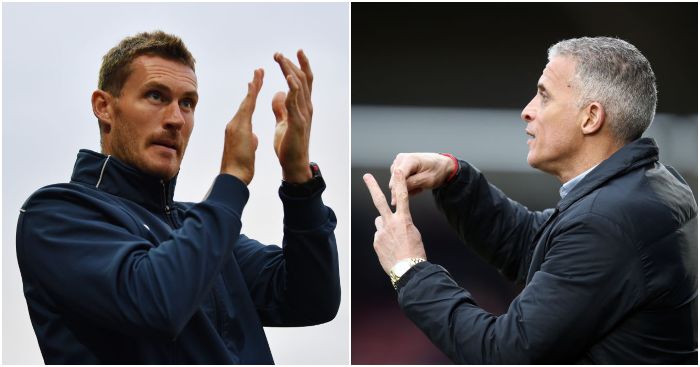 Exeter encounter Northampton’s Curle-ball in the first behind-closed-doors Wembley final. Who can reach the Promised Land of League One?

It’s a League Two play-off final clash between the best nicknames in the EFL tonight as the Grecians go up against the Cobblers.

Both made the final the hard way. Exeter went to extra-time in their second leg semi-final 3-1 win over Colchester United; Northampton came back from a 2-0 first-leg deficit to beat Cheltenham Town 2-3 on aggregate.

This promises to be an intriguing tussle, with both teams likely to line up with solid 3-5-2 formations. This makes the centre-midfield battle key as old stagers Nicky Law (Exeter) and aggressive veteran Dubliner (Alan McCormack (Northampton) square up in the middle.

Up top, Northampton’s free-running redhead Callum Morton starred for the Cobblers in their second-leg semi-final comeback at Whaddon Road. West Brom loanee Morton bagged a brace and comes with a serious work ethic, married with real finishing ability. His strike partner will likely be Vadaine Oliver, a capable target man who bossed Cheltenham with an early goal to set Cobblers on their way to a memorable revival.

In Ryan Bowman, however, Exeter possess an imposing front man of their own. The former Motherwell forward settled the Colchester semi-final with a smart 111th-minute run and finish. Much will depend on which forwards can find space amidst the constrictive attention of three centre-backs.

Meanwhile, the wings will be important areas for both teams and a battle between Exeter’s skillfull ball-to-feet midfielder Randal Williams and Northampton’s assist-king Nicky Adams could prove decisive.

Much of Northampton’s uber-direct style of play – Curle-ball – will come through Adams and Exeter’s ability to defend his accurate crossing will determine the outcome. There may be concerns about the Cobblers’ need to mix it up with accurate shorter passing on an imposing Wembley pitch as Northampton have the second lowest pass-completion ratio in League Two. That may give the more patient Exeter a route into a game on an energy-sapping occasion.

Exeter have fallen short in trying to escape the basement division in recent years, losing in the play-off finals of 2017 and 2018, so there may well be a mental element in the fear of failing once more.

Curle, however, hasn’t won promotion in his 18-year managerial career and will be feeling the pressure to put that right this time around.

In an eerily quiet Wembley it will be interesting to see which team can rouse themselves when the going gets tough. Exeter have as many as seven players imminently out of contract while Northampton will have their own many for whom this may be their last match for the club.

The Grecians will have to earn the victory and the Cobblers will need to show soul to get their hands on a socially distant trophy.